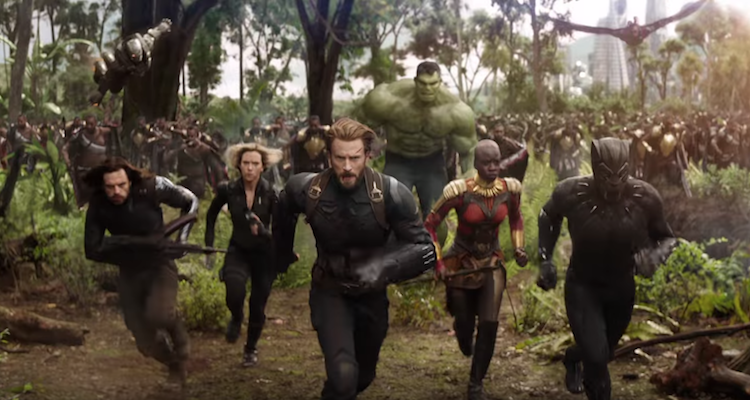 The wait is almost over, a movie that has been years in the making and the culmination of threads in nearly 20 other films is nearly upon us. The Avengers: Infinity War trailer gives us a glimpse into what we can expect from the latest installment in the Avengers films. Our  Avengers: Infinity War trailer breakdown will take a look at the trailer bit by bit and figure out which characters will be involved, what this film might mean to the Marvel Cinematic Universe, and look at who Thanos is, as well as who Thanos kills. Warning, possible spoilers!

Now that you’ve watched the trailer, let’s talk about it. The Hulk crashes through Dr. Strange’s roof right and lands in the basement, giant machines are in the sky, Thanos kicks Spider-Man’s ass, there’s a huge battle on the plains of Wakanda, Thor meeting the GUARDIANS OF THE GALAXY! Okay, we’ll admit it, we’re a bit excited for this movie. Avengers: Infinity War is the big pay off for a storyline that began in the first Captain America film. The trailer confirms a few stories that have been floating around. Almost every major Marvel film character is involved in Infinity War, including a few surprises like Winter Solider, who was frozen last we saw him, and War Machine, who was paralyzed, and just learning to adjust to Tony’s new device towards the end of Captain America: Civil War. It also confirms that Loki stole the Tesseract from Asgard during Thor: Ragnarok.

So while we’ve gotten to see brief glimpses of Thanos in different Marvel films, you may be wondering who the character is and who plays Thanos. He is played by veteran actor Josh Brolin and in the MCU, Thanos is the biggest bad guy there is. We know he’s been on a quest to gain all of the infinity stones and the power that they contain. We are still unsure as to why he wants all this power, but we do know that Thanos’ comic book counterpart worships Death and, in order to keep his mistress happy, he annihilates half the universe with the infinity stones. Considering he mentions something about balancing the universe in the trailer, there’s a good chance his mission is the same in the films. How is Thanos defeated? We’re not sure he will be, at least in this film.

The squad of all squads. Thanks @vanityfair this is so crazy. #avengersinfinitywar #squadgoals #marvel

What You May Have Missed

There are a couple of things you may have missed while watching the trailer, as well as a couple of easter eggs for those of us who are…er…um… really nerdy. Here’s a small list:

• Black Widow is blonde! This is due to Captain America’s crew being on the run from the law as of the end of Civil War. It’s also a subtle nod to the second Black Widow who appeared in the comics in the late ’90s and early 2000s who sported a similar haircut.

• Spidey got a new suit! Spider-Man is sporting a new-ish costume for most of the trailer. You may recognize it as the suit that Tony Stark had waiting for him at Avengers headquarters at the end of Spider-Man: Homecoming.

• No Hawkeye? We know that Jeremy Renner filmed scenes for this movie but yet, he’s not in the trailer. Where is Hawkeye? About that…

Who Dies in Infinity War?

To be honest, we aren’t positive anyone does die in Infinity War, but big stories like this usually involve a sacrifice or two. Combine that with the fact that a number of these actors’ contracts will be up soon, or are finished with Infinity War and/or Avengers 4, there’s a solid chance someone doesn’t make it out of this adventure alive. Since Hawkeye does not appear in the trailer, maybe he gets cut down in the film? Or maybe he’s going to make an appearance in the second installment? Captain America died in the comics so it wouldn’t be unheard of for him to make the biggest sacrifice of them all.