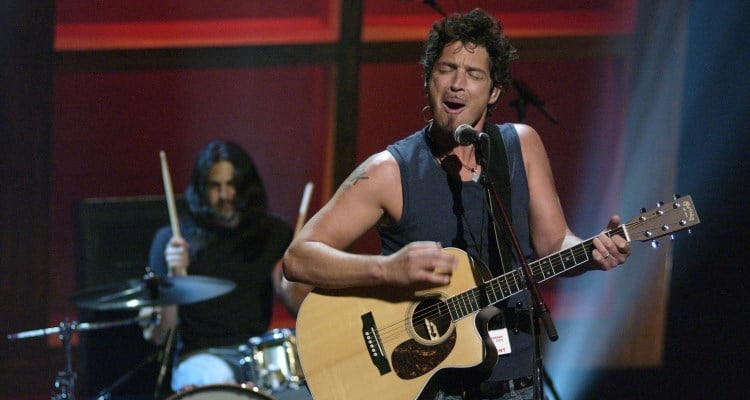 At 52 years old, Audioslave’s singer Chris Cornell has died. The dynamic guitarist and vocalist known for his role as frontman of Soundgarden and Audioslave, died allegedly by suicide on Wednesday night. To celebrate the musical genius behind Audioslave’s greatest hits, here’s what you need to know about the band.

To kick off our Audioslave wiki, it would be remiss to avoid the evidence surrounding Cornell’s death. According to Rolling Stone, police received an emergency 911 call around midnight from a family friend. When the friend went to Cornell’s MGM Grand Detroit hotel room to see how he was doing, he found Mr. Cornell unresponsive, “laying on the bathroom floor.” Michael Woody, Director of Media Relations for the Detroit Police Department made the report. The Wayne County Medical Examiner stated that based upon the evidence, Cornell allegedly killed himself by hanging. That being said, a full autopsy report is still in the process of determining the precise cause of death. Musicians and celebrities took to Twitter to share their sadness about the news, and their admiration for Cornell’s work in the music industry. “Incredibly talented,” said Jimmy Page of Led Zeppelin. “Incredibly young. Incredibly missed.” Elton John also wrote that he was “shocked and saddened” by the sudden death. He referred to the deceased singer as “a great singer, songwriter, and the loveliest man.”

The remaining band members of Audioslave are Tom Morello, Tim Commerford, and Brad Wilk, and they were signed under Epic and Interscope labels. The members teamed up in Glendale, California, and have been playing ever since. It all began when Rage Against the Machine’s frontman Zack de la Rocha left the band, leaving Commerford, Morello, and Wilk behind. The three members decided to continue on to make new music with a new vocalist. Cornell, the ex-frontman of Soundgarden, was the singer who stuck, despite former attempts by the trio to partner with other vocalists. The chemistry between the band members was undeniable. “He stepped to the microphone and sang the song and I couldn’t believe it. It didn’t just sound good. It didn’t just sound great. It sounded transcendent,” said Morello.

The Top Tens web site features the best Audioslave songs based on user votes, and looking at the consensus, the number three most loved song is “Show Me How to Live.” Audioslave’s lyrics in this song can be interpreted as a cry for help from God, as Cornell says although God created him, he needs guidance. The song is full of religious references, including “nail in my hand,” which relates to Jesus’ crucifixion.

The second favourite song listed is “Be Yourself.” Cornell once said in an interview with Launch Radio Networks, that “The ‘be yourself’ part really just came from a lot of things that I’ve gone through in my life and a lot of different changes and all the different tragedies and all the horrendously stupid mistakes I’ve made in my personal life, and wanting to be able to make up for those things and wanting to be able to not be ashamed, all that stuff.”

The number one most loved song by Audioslave based on fan voting is “Like a Stone.” Commerford, the band’s bassist, explained the meaning of the song as an old man waiting for death. The man sits alone in his house after all his loved ones have died before him, and he waits to be reunited with them. Cornell explained the song to mean that “Like a Stone’s” lyrics were about finding God through non-traditional means, and that heaven is whatever you make it to be. The song is reflective and beautifully haunting, maybe even more so now that he’s gone.

Audioslave produced three albums in the 2000s that have stuck with fans throughout their lives. The Audioslave albums include Audioslave, released in 2002, Out of Exile (2005), and Revelations (2006). The last Audioslave tour date was in January 20, 2017 at the Anti-Inaugural Ball in Los Angeles, CA, and with the unfortunate and shocking death of Cornell, it may have been their very last show.

As the world mourns the loss of an iconic musician, his memory will be kept alive through his incredible, timeless songs. Rest peacefully, Chris Cornell.