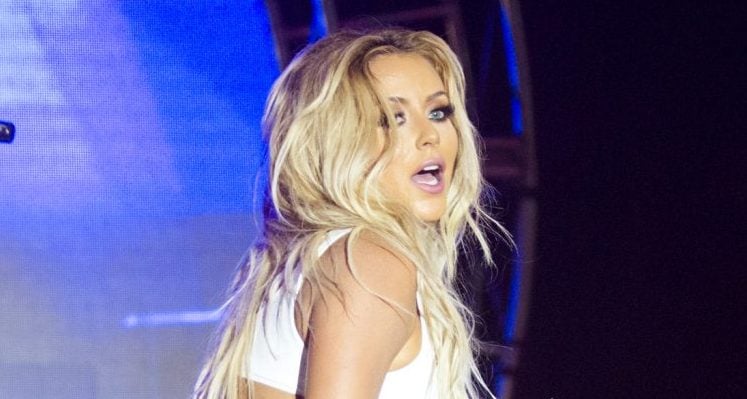 Is it too early to spill the beans? We hope not because rumor has it that Danity Kane singer Aubrey O’Day allegedly had an affair with Donald Trump Jr. Not only that, she supposedly sang about it in her song, “DJT!” Now many are looking up Aubrey O’Day’s Instagram account to find clues and to see if there’s any truth to this shocking story. Many others are simply heading there to check out some of Aubrey O’Day’s hottest pics. We’ve scoped it out and found some gems below!

Could there have been a fling between Aubrey O’Day and Donald Trump Jr.? The White House is proving once again that scandal “trumps” policy and many are speculating that the affair led to Vanessa Trump filing for divorce!

According to Page Six, Trump’s daughter-in-law filed for divorce from his son in the Manhattan Supreme Court last Thursday.

“After 12 years of marriage, we have decided to go our separate ways,” the couple, both 40, told Page Six in a joint statement. “We will always have tremendous respect for each other and our families. We have five beautiful children together and they remain our top priority. We ask for your privacy during this time.”

The couple didn’t speak on exactly why they are getting divorced. But knowing the Trump Dynasty, there was most likely a prenuptial and confidentiality agreement involved.

Was O’Day’s alleged affair with Trump Jr. partly to blame? The 34-year-old singer met Trump Jr. on the set of Celebrity Apprentice’s fifth season back in 2011, and a source close to UsWeekly said that things heated up between them.

The alleged affair was called off in March 2012, and a UsWeekly source claimed that Trump Jr. was going to leave his wife. He had three kids with Vanessa Trump at the time but they later reconciled and had two more children before filing for divorce.

Many are now looking up O’Day’s “DJT” lyrics and trying to see if they really are about the alleged affair. People also can’t take their eyes off Aubrey O’Day’s Playboy-style photos online and are already drawing their own conclusions.

We’ve gone ahead and gathered some of the best Aubrey O’Day pics from her Instagram account for your viewing pleasure. Check them out and comment below on whether you think the rumors are true or not!

I’m only interested in the things money can’t buy.

If you want confidence in any look.. casual or dressy, @sneakyvaunt always comes first! It’s good for 40+ wears, so I never have to worry about my outfits being on point – check out sneakyvaunt.com for the best boost around!

#5. Mirror, Mirror on the Wall

when she’s around nothin else matters.. untouchable, she’s got her own force field. ?: @unekform_official Makeup & ?: @paintedbyspencer Hair: @bpalestino

i don’t like to make a big deal out of my birthday.. ?

new year, new tummy! @flattummyco are coming through for me right now. Just started their Shake It Baby program and I’m freaking pumped – I always get incredible results. So if you wanna get on it with me and try it out… Let’s Go! #ad