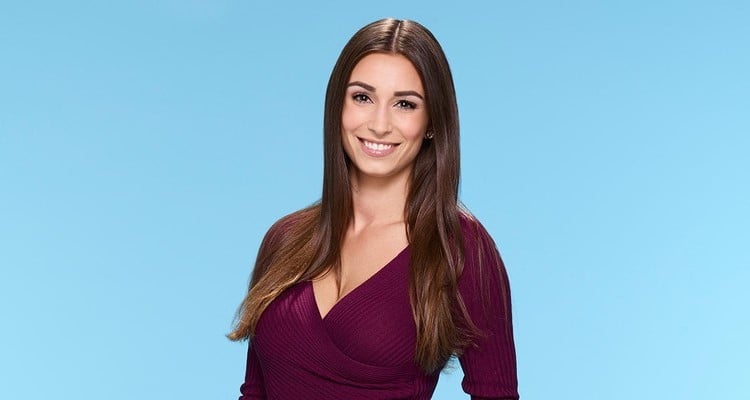 Who is Astrid on The Bachelor? We’ve got some interesting facts to share about the bachelorette, plus 10 of the best Astrid photos!

Each of the season 21 contestants on The Bachelor has brought something to the table to win over Nick Viall’s interest. Rachel Lindsay brought her law credentials, Alexis Waters brought her “dolphin” (really a shark) costume, and Astrid Loch brought her German language. The 26-year-old plastic surgery office manager from Tampa, FL, asked the bachelor in German, “I know you are in touch with your sex life. Have you seen the breasts?” He obviously had no idea what she was saying. “They are real,” she added. Nick looked intrigued and confused. “If only you knew what I said,” she joked. For those looking for Astrid from The Bachelor’s Instagram photos or want to know extra facts about her life, here’s what you need to know.

Roses are red, violets are blue, pass me the pizza, and the red wine too ??? Join me in an hour for the premier of The Bachelor @bachelorabc #thebachelor #bachelornation #abc

Astrid stands 5’7.5” and has a feather quote tattoo on her left underarm, plus a half heart/infinity symbol on her right wrist. Her favorite movies are Titanic, The Other Woman, Beauty and the Beast, and the Bourne movies. Her five essentials are her mother, lashes, phone, yoga, and red wine, and she mentioned she would love to be the fictional character Ariel from The Little Mermaid before she got her legs. She loves the ocean and if she could be any animal, she would choose a dolphin, “so I could rescue lost sailors and swim in the ocean doing tricks.” Maybe she should have been the one to show up in a dolphin costume!

She Would Rather Not Work

Nick may have to be the breadwinner if he chooses this hopeful contestant, because when asked if there was one thing she would be happy to never do, she responded, “work.” Based on Astrid’s pics on Instagram, her highlights include trips to the beach, nights out with her friends, and vacations. She also has a huge appreciation for her mother, Marina Mogul.

The hot Bachelor contestant is originally from Charlotte, NC. She has a BA in Communications and a Minor in Women and Gender Studies from the University of North Carolina. She currently works as an office manager and patient care coordinator for Soler Aesthetic Plastic Surgery and helps patients prepare before their surgery appointments.

Assets to Run After

Astrid’s sexy long legs may catch Nick’s eye as she gets more time with him, but the real question is, does she have what it takes to win over his heart? In the photo below, Astrid rocks a tiny black bikini, while doing a headstand on the beach and showing off her toned physique, which will likely initially grab Nick’s attention. The skills from her job may also be an asset for her, as she tries to create a bond between herself and Nick. If she can help nervous patients calm down before they go under the knife, she could be a good source of comfort for Nick when he’s stressed out. There has only been one episode so far, so we have a long way to go before finding out what the rest of her cards are, and if she knows how to use them effectively!

To find out which contestants will make it through, tune into the ABC Network, Mondays at 8:00 p.m. EST!