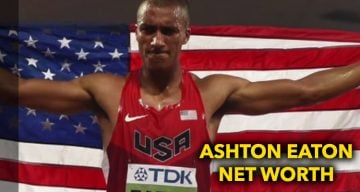 His salary is approximately of $70,000 per year. However, with his lucrative endorsement deals and sponsorships, that figure is steadily rising. The athlete has been bestowed with numerous athletic awards such as the Jesse Owens Award for U.S. Track and Field Male Athlete of the Year, as well as the World Male Athlete of the Year. He is only the second decathlete to break the 9,000 point barrier with 9,039 points.

Eaton reportedly earned $750,000 for breaking the world record and setting a new one at the U.S.A Track and Field trials before the 2012 London Olympics. In addition, Eaton was approached by Gillette to endorse their razors before the 2016 Rio Olympics. He currently has long-term contracts with Coca-Cola, Chobani, and Visa. Eaton also appears in Proctor & Gamble’s “Moms” campaign. Referring to the agreement, he made a statement in an interview that, “Obviously it’s the same family, so I deal with a lot of the same entities, and they have the same values. It’s also made things easy.”

Eaton is known for being particular about his own brand’s image before agreeing to endorse any product or service. In an interview, he announced that “You get approached by sponsors, and there’s just campaigns they want to run and the stories they want to tell, and you get a choice. [Myself and Gillette] are kind of looking to tell a parallel narrative. We both have goals, and the path to those goals isn’t always pretty, it’s rough. I think it’s what people should be seeing or hearing. Even if you see a great performance, it’s not always great getting there. There are injuries. … Intrinsically or unconsciously, people understand that — people see those performances, and they know there are stories behind that.”

The superstar has earned thousands of dollars in cash prizes. Traditionally, American athletes who win medals at the Olympics receive a cash prize from the U.S. Olympic Committee. Besides the Olympics, athletes like him compete in various competitions throughout the year such as the World Championships and World Indoor Championships. So far, the Portland, Oregon native has collected a treasure trove of medals such as six gold medals in eight major international competitions as well as one silver. According to sources, the average cash prize for gold varies from around $40,000 while breaking a world record at the World Championships can fetch you a $100,000 bonus. That’s not all; at the 2012 London Olympics, Eaton won an estimated $25,000 cash prize for winning the gold medal.