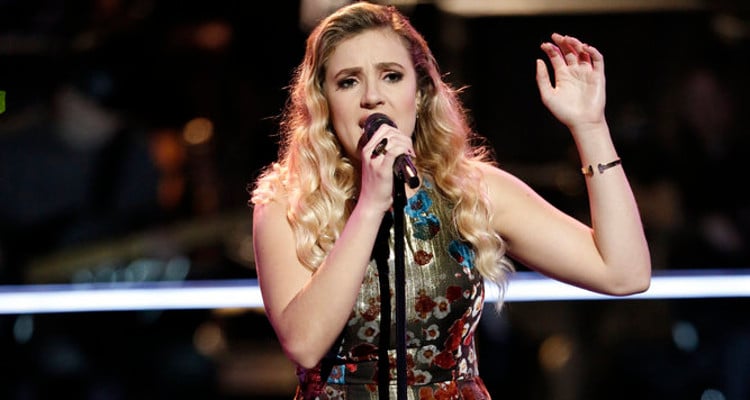 Last night (April 3), 12 contestants from The Voice competed in the Knockouts. From Alicia Keys’ team, Ashley Levin and Lilli Passero were pitted against each other. Ashley sang “Fancy,” by Bobbie Gentry and Lilli graced the audience by singing, “Tears Dry on Their Own” by Amy Winehouse. They both did a spectacular job, and impressed each coach.

Alicia Keys named Ashley Levin the winner, and Adam Levine decided to steal Lilli Passero. Ashley was originally on Blake Shelton’s team, but lost against Casi Joy in the Battle Round. However, Gwen Stefani, Adam Levine, and Alicia Keys all wanted to steal Ashley and, ultimately, she chose to be on Team Alicia.

Also Read: Troy Ramey Wiki: Everything You Need to Know about “The Voice” Contestants

Ashley Levin’s age is just 23, but she has managed to captivate the coaches with her amazing voice. She is originally from Miami, but recently moved to Nashville. Ashley has been singing and dancing since the age of three.

Ashley has a younger brother and two older sisters and says that it “was always like a huge musical happening at our house.” Her dad is 20 years older than her mom, and the two separated when Ashley was in the eighth grade. Ashley’s father was diagnosed with early-onset Alzheimers, so she moved to Miami to be with him, juggling school and music while trying to manage both. According to Ashley’s Instagram account, she is in a relationship with a man named Garrett Fracol, but no other details about Ashley’s boyfriend are known at this time.

Also Read: Stephanie Rice Wiki: Everything You Need to Know about “The Voice” Contestant

When you have to raise your hand way up in the air to reach all the high notes! ?☀️??? Let the battles begin! Be sure to watch out for me on #thevoice TOMORROW night! Tune in starting Monday at 8/7c on @nbcthevoice ! #thevoice #voicebattles #teamashley #teamblake #singer #songwriter #music #nbcthevoice #nbc #ashleylevin

Ashley’s musical career started off at a very young age. During elementary school, she began performing in musicals, which she continued throughout high school. During her senior year of high school, Ashley was one of the eight singers selected for the Grammy Foundation Jazz Choir, which meant she got to record a digital jazz album, perform at various functions, and attend the Grammys.

Ashley went to the University of Miami, where she studied music business and jazz vocal performance and graduated in May 2016. She stayed and performed in Miami for a bit before moving to Nashville. While at university, Ashley also got the chance to perform with some esteemed singers like Gretchen Parlato and Esperanza Spalding.

The talented singer has already written six songs that are all available on Soundcloud, about one of which she said, “’Irresponsible’ probably has one of the strongest stories,” adding, “It’s about a break up I went through during college. The song starts pretty stripped down and continuously builds stronger and wilder throughout, just like the fight that ended things in my relationship. Just shows you how a single word or comment can spiral into a huge fire that you never meant to start in the first place.”

Ashley Levin on The Voice 2017

Hey guys! This has been such a memorable experience for me so far, and I am so excited to share with you what comes next!!! So don't forget how it all started, and download the FULL VERSION of my blind audition song on iTunes!!! Love you guys! ☀️?? #nbcthevoice #teamblake #teamashley #itunes #blindauditions

During her Blind Audition, Ashley Levin thought that nobody would turn their chairs around for her, “Right after I had accepted that no one was gonna turn, boom! They started turning. It was absolutely wild. It’s funny that right after I kinda ‘gave in’ and just sang because I loved singing, rather than singing to get someone to turn around, that it’s when they all decided to turn.” In the end, Blake, Gwen, and Alicia turned their chairs for Ashley.

Although she said that both Alicia Keys and Gwen Stefani made tempting offers, Ashley decided before her Blind Audition that she would be on Team Blake. “But I knew that I love country music. I moved to Nashville for my songwriting and singing, and that Blake would be the best choice for me to continue cultivating all of that. I will say though, I woke up in the middle of the night for about a week after the blinds, thinking, ‘Ashley .. you turned down Alicia Keys.’”

The Knockout Rounds will continue tonight (April 4) where we can see who else makes it to the live shows. Watch The Voice Mondays and Tuesday nights at 8:00 p.m. on NBC.