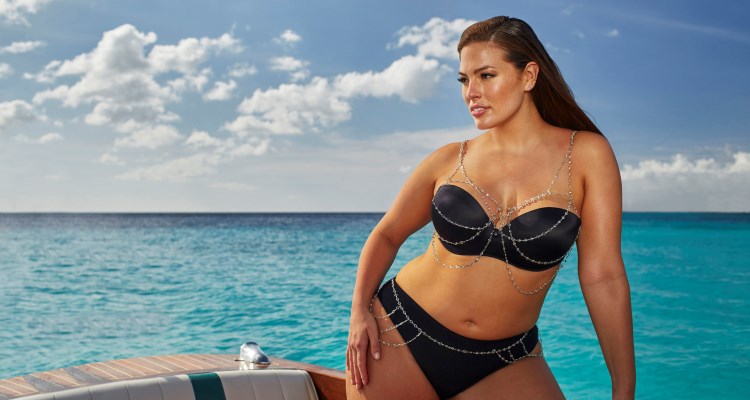 Model Ashley Graham made a special appearance in Nick Jonas’ “Chains” performance at the VMAs on Sunday night, and now people are wondering if she is Nick Jonas’ girlfriend! Ashley Graham’s VMAs appearance was totally adorable – Nick Jonas and Ashley Graham had a brief interaction in the video, so perhaps this is the reason for all the questions. Want to know if the Ashley Graham dating Nick Jonas rumours are true? If you want the answers to that, plus five extra facts about the gorgeous model, keep on reading!

Six years ago, Graham said “I do” to her hubby, Justin Ervin, and the couple have been madly in love ever since. She told Entertainment Tonight their relationship is currently long-distance. Graham is working in New York City, modeling for various fashion gigs, and Ervin is working as a cinematographer in Los Angeles. She said, “We have a rule. We don’t go longer than two weeks without seeing each other. It’s absolutely fabulous. I love it. We just meet in L.A. or New York. We meet in Paris, Miami.” She makes her marriage a top priority and that sure takes hard work considering their busy and demanding careers!

She Dislikes Being Called ‘Plus-Sized’

The fashion industry has been dramatically challenged in the past few years, thanks to advocates who believe the standards for models need to be adjusted – slim bodies aren’t the only ones who should be deemed attractive! One activist for this cause is Ashley Graham, who is signed to IMG Models and makes it her life’s mission to share her 15 years of experience in the fashion industry, educate, and inspire women.

This is the summer of #CurvesInBikinis! @swimsuitsforall is challenging you to help them get 1,000 women in a bikini in 30 days. Post of a pic of yourself wearing a bikini (any bikini!) on Instagram or Twitter, tag #CurvesInBikinis & #The30DayChallenge for a chance to win a swimsuit. They are selecting one winner per day, so show us all of your bikinis! #beautybeyondsize -wearing @gabifresh-

In a Ted Talk she gave called, Plus Size? More Like My Size, she said, “You are bold, you are brilliant, and you are beautiful. There is no other woman like you. You are capable. Back fat? I see you popping over my bra today, but that’s alright. I’m going to choose to love you. And thick thighs? You are just so sexy you can’t stop rubbing each other. That’s alright. I’m going to keep you. And cellulite, I have not forgotten about you. I’m going to choose to love you even though you want to take over my whole bottom half. You’re a part of me and I love you.”

She also criticized the decision to label people over a U.S. size eight as “plus,” to push the industry to look past their size paradigms. Ashley Graham’s bathing suits are sometimes criticized because of her buxom figure, but she stands strong and remains confident, teaching women to embrace the bodies they were given, instead of trying to achieve the “socially acceptable” model.

As if her married status wasn’t a drawback enough, Graham sometimes receives images on the ‘gram that creep her out. At the MTV VMAs white carpet on Sunday, she told Page Six, “I really think it’s weird when they send me p—s pictures [on Instagram], it irks me deep inside. Don’t do it, I’ll block you.” She often has men send her pictures of their privates through the direct message feature on IG, and she is not having it!

She is a Body Positive Activist

In response to some criticism she got on one of her Instagram photos last year, Graham confidently replied, “People come on my page and body shame me because I’m too big, because I’m too small, because I’m not good enough for their standards… But at the end of the day I’m good enough for me. Angles will make anyone look bigger or smaller and I just happen to know mine.” Wow, way to go, girl!

Check out my TEDx talk in the link in my profile for more on how I gained respect and ownership over my body. #iamsizesexy #beautybeyondsize

Did you know Ashley Graham also had an on-screen moment with Nick Jonas’ brother, Joe Jonas? In DNCE’s “Toothbrush” music video, she plays Joe’s beautiful girlfriend. The couple get pretty close in the video: they cuddle in bed, hold each other in a cab ride, and even share a kiss near the end of the video! Perhaps this is why so many were asking if she was dating a Jonas brother!

She made her VMA appearance in Nick Jonas’ “Chains” video, as he danced and sang at a Tick Tock Diner. In a brief moment, he walks behind Graham’s seat and sings to her. They smile at each other before he dances off to sing with the next guest – how cute!