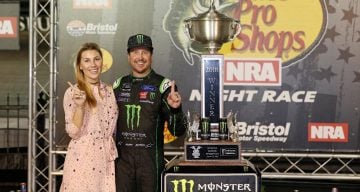 Kurt Busch’s fans were thrilled when he married Ashley, mostly because they love the kind of person he has become ever since. Ashley Busch is a polo player and soon-to-be reality star. CMT’s Racing Wives is all set to air in 2019, and the ladies are here to give the rest a run for their money!

This Ashley Busch wiki delves into her life as a rising star and the wife of a pro racecar driver, and reveals some details from the Busch wedding. Did you know Ashley and Kurt Busch were introduced by Ashley’s sister? Here are four facts to know about Ashley Busch that you never knew before.

Though the polo-playing beauty is married to one of the best NASCAR racers in the country, she is more than happy to ride her equine mustang over the steel machines her husband races.

Ashley Busch (née Van Metre), is a world-class polo player, and you might recognize her from the July 2018 polo event held by Prince Harry and Meghan Markle. Busch began riding when she was six years old and has never looked back. But she does credit her friend’s mother for her choice to take up the sport as a career. Busch says she and her friend were taken to a polo school by her friend’s mother one day, and she was hugely inspired.  She decided that she wanted to be a professional polo player.

Ashley Busch, now age 27, has won many tournaments around the world, including the Port Mayaca 14-goaler and the International Polo Club 12-goaler.

Her father, Beau Van Metre, is also a polo player, and the father-daughter duo have played together as well.

“I definitely am a fierce competitor on the field,” Busch said, adding, “In real life, I’m a fairly mellow person. When I put my helmet on and get on the horse, it’s like I’m a different person. I really get into the game. I’m there to win.”

Ashley Is the First Brand Ambassador for the USPA

The U.S. Polo Association signed Busch in 2017 as their brand ambassador and female face of the brand. The 5-foot-8-inches-tall beauty not only models for the polo-inspired fashion brand, but also promotes their products on her social media accounts.

She also took fans by surprise when she collaborated with swimsuit company La Isla’s founder Enrique Sánchez-Rivera for his own label.

“This year, I am creating my own swimwear line, in which Enrique’s private label company is producing. It has been such an exciting process from drafting the designs, to choosing fabrics and colors,” the player said in 2017.

Ashley and Kurt first met in 2014, and it was love at first sight! The couple was introduced to each other by Ashley’s sister, who was a friend of Kurt’s, and we’re sure they’re forever indebted to her.

After dating each other for a little under a year, Kurt, 40, popped the question with a Tiffany & Co. stunner, which he’d apparently had his eye on for months.

Good to be home for the holidays ? #happyholidays #tistheseason #festive

“After spending the holidays with Ashley and her family, I felt something growing in my heart. It told me to ask her father, for his daughter’s hand, which I finally built up enough courage to do in June 2015,” Kurt recalled.

He got down on one knee in a barn at her home in Virginia, which was decorated with rose petals and candles for the special occasion.

After the engagement, the couple celebrated their relationship with a vacation in Greece. The wedding planning started almost immediately upon their return, and Ashley chose St. Bart’s as the wedding’s destination.

The wedding party included only 40 close friends and family, as the couple chose to go for an intimate ceremony. But the reception held a week later in Palm Beach, Florida was beyond anyone’s expectations!

The legendary Steven Tyler sang for the couple in a surprise performance, and we’re sure the crowd went mad for all his songs.

What a legend! Thank you @iamstevent for performing at our wedding celebration! @kurtbusch and I had the time of our lives! Thanks @briandorseystudios for the best photos ?????

CMT’s newest show, Racing Wives, goes on air in 2019, and viewers will get a glimpse of what kind of lives these women lead.

Be it cozying up to their husbands in their expensive homes or giving them that extra boost on the racetrack, fans will be treated to a whole lot of NASCAR, and the spicy things that go on behind the scenes.

An interesting dynamic to watch will be that of the two Mrs. Busches on the show. Samantha Busch, who is married to Kurt’s younger brother Kyle Busch, has always maintained a hot and trendy persona, and it looks like she has some competition now.

Okay, so we’re not going to go all “Kate vs. Meghan” on them, but how are they any less than royalty in the NASCAR world?

Also Check: Some of the Hottest Pics of Danica Patrick

The sisters-in-law have not made too many appearances together on their personal social media pages, either, adding that extra fuel to the show’s fire.

Aside from the Busches, the cast also includes Daytona 500 winner Austin Dillon’s better half, Whitney Dillon, and her BFF, Mariel Lane.

While the network has yet to release a date for the first season, they have released a trailer on their official CMT website, and it looks like a drama-filled gold mine has been discovered!