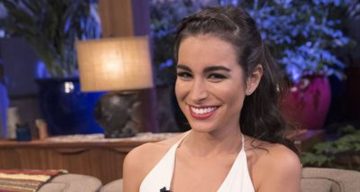 Here are four facts to know about Iaconetti and Adams:

#4 Ashley Was Madly In Love With Jared Haibon

These days I feel pretty without a ton of makeup thanks to Rodan & Fields’s Soothe line. I’ve been using it for about four months now and my redness, dryness, and overall irritation has significantly decreased. @rodanfields has a skin care line created to help pretty much every problem. If you’re seriously interested in improving your skin, I’ll be doing personal one-on-one 20 minute Skype consultations tomorrow and Tuesday. Email me at [email protected] with a little background on your skin issues and your preferred day and time. I hope to chat with some of you on Skype this week!!

Fans of the show are well-acquainted with the Ashley-Jared-Caila love triangle by now. Ashley was crazy in love with Jared, who only saw her as a friend and wanted to be with Caila instead. Despite Ashley shedding copious amounts of tears (copious is an understatment) Jared refused to budge and set the record straight with her that he had eyes only for Caila. Subsequently, Caila and Jared dated for a while, but broke up due to her reservations about their relationship. A heart-broken Jared left Bachelor in Paradise, while Ashley moved on to greener pastures.

Once upon a time (AKA a year ago today), a girl who thinks she’s a princess met a prince with a killer jawline. They didn’t live happily ever after in the traditional sense, but they did become great friends. ???? (Sorry I posted a bad hair pic of you, @jaredhaibon.)

#3 Ashley Begged to Stay In Paradise

Despite being eliminated along with Sarah Herron, Ashley cried and begged to remain in the show. Surprisingly enough, her tantrum worked, and she was allowed to stay in Paradise alone, although not for too long. The arrival of Wells Adams promises to change her life, and hopefully she will finally find love after having her heart broken time and again by Jared.

#2 Wells was Rejected by JoJo

Wells Adams, the 31-year-old Radio DJ from Nashville, was first seen on JoJo Fletcher’s season of The Bachelorette. She may have rejected him due to a lack of chemistry, but he remains a fan favorite thanks to his wit, humor, and normalcy. Also, who doesn’t love a guy who posts adorable photos on Instagram with his dogs? The Portuguese heartthrob was sent home by JoJo, but makes a reappearance in Bachelor in Paradise to take Ashley’s mind off Jared.

#1 Wells and Ashley May Become a Couple

Until Wells Adams arrived on the scene, no one and nothing had been able to convince Ashley to give up on Jared and move on. According to Reality Steve, Adams is the man for the job. Naturally, when he shows up in Paradise, Ashley takes an immediate liking to him, and sparks fly harder than a Taylor Swift song. Fans love them immediately, glad that they don’t have to bear Ashley’s iconic ‘ugly cry’ for much longer. In the promo for season 3, Wells is seen kissing Iaconetti, and she reveals that once she met Wells, “everything turned around.” We hope everything works out between these two lovebirds!