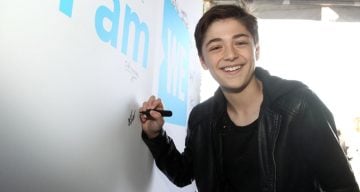 Asher Angel is a young actor who got his big break earlier this year when he was cast in Disney Channel’s hit show, Andi Mack. And recently, Asher Angel has been chosen to play a role in Shazam!, a big budget superhero film. But who is Asher Angel? Keep reading to know all about him in our Asher Angel wiki.

Born in Paradise Valley, Arizona, on September 6, 2002, Asher Angel’s age is 15. According to IMDb, Angel’s current height is only 5’3″, but there’s a good chance that may change as he’s still only a teen.

Since Asher Angel is a very young actor and quite new to our screens, what we know about him is pretty limited. Here’s what we know for sure:

Asher Angel maintains different social media accounts to help spread his name and talent across the Internet. In addition to Asher Angel’s Instagram (where you can find many Asher Angel pics), he also maintains a Facebook page and a Twitter account.

Angel also has a YouTube channel where he shows off his musical talents with videos of him performing covers of songs with a guitar. Currently, his YouTube account has 104,533 subscribers. Most of the videos appear to be filmed in Angel’s home in Arizona, with the songs all being performed acoustically.

Asher Angel got his start as an actor in the independent film, Jolene, starring Jessica Chastain (her first starring role in a film) and Frances Fisher. At the time, Angel was only five years old!

Angel then played parts in several short films before landing a part on Nicky, Ricky, Dicky & Dawn. This was followed by his role on Criminal Minds: Beyond Borders before gaining a regular role on Disney Channel’s Andi Mack. It wasn’t until his role on Andi Mack that he became more well-known.

Asher Angel plays Jonah Beck on the popular Disney show. As part of the plot line, Jonah was romantically sought after by two characters on the show, Andi Mack, a girl, and Cyrus, a boy. The storyline marked the first time a teen comedy/drama on the Disney Channel had not only a gay character, but also a gay character in this type of story.

Yesterday it was reported that Asher Angel had been cast as Billy Batson in the film adaptation of the DC comic book, Shazam! A slightly different tone from the current roster of DC superhero films, Shazam! is essentially about a young kid, Billy Batson (Angel), who gains the magical ability to turn into a superhero with Superman-like abilities by simply saying the word “Shazam.”

What do you think of this casting??? ⬇️Comment Below⬇️ • Art by @bosslogic

What makes this character somewhat unique is that the main character is a kid who transforms into an adult superhero named Shazam, who is going to be played by Zachary Levi. Levi is best known for his roles on the television series, Chuck and Alias Grace. This means the two actors will have to work together in order to keep some continuity to the character.

As for Shazam!’s villains, rumor has it that Mark Strong is being considered for the part of Dr. Thaddeus Sivana. But we do know that Dwayne “The Rock” Johnson has long been cast as Black Adam, who is Shazam’s villain at times, but also a hero.

Currently, it is unknown if Black Adam will appear in this film or in a potential stand-alone Black Adam movie. But we wouldn’t be surprised if The Rock does a quick cameo, anyway!