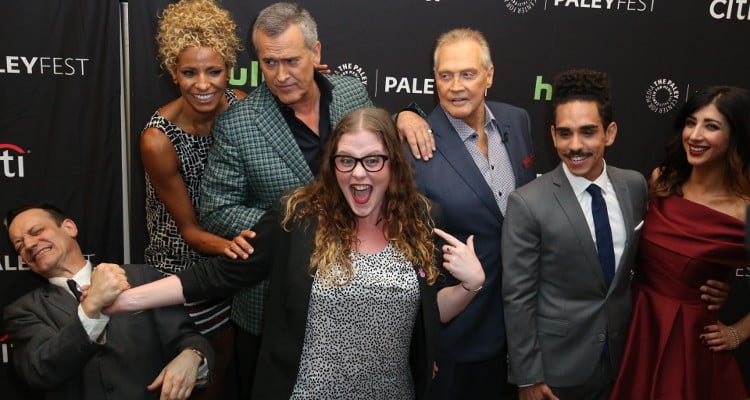 The groovy horror-comedy, Ash vs Evil Dead is back with an all new season! The TV show is a spin-off of the Evil Dead movie franchise, set 25 years after the events that occurred in Evil Dead. After a successful season 1, Evil Dead hero, Ash Williams is back for another fun and action-packed season of Ash vs Evil Dead. Fans of the franchise are probably wondering, “who are the survivors fighting evil alongside Ash this season?” If you have been looking for details on the Ash vs Evil Dead season 2 cast, your wait ends here. We have all the information about the survivors taking on the evil dead.

You can’t have Ash vs Evil Dead without Ash! After the success of the Evil Dead trilogy, Bruce Campbell will once again take on the role of Ash Williams, in the TV show sequel. This time though, Ash has to deal with his middle-aged self! He’s not that young, pompous, monster-fighter anymore, but still has more looks than brains. Lucky for us, he’s still dumb enough to release the evil demon into the world. More fun for us!

She’s the new face in the Evil Dead universe. Played by Lucy Lawless, Ruby Knowby is mysterious and reclusive and wants to hunt down the source of the evil outbreak. She claims to be daughter of Professor Raymond Knowby from Evil Dead II. She believes Ash is to blame for her family’s death and she has vowed to kill him.

Ash’s loyal friend and sidekick, Pablo Bolivar Santiago is back this season. He’s played by Mexican-American actor, Ray Santiago. Pablo was trained as a Shaman and believes Ash is the hero that will defend against the unleashed evil being, even if Ash has no faith in himself.

DeLorenzo reprises her role as Kelly Maxwell, a woman who lost her family to the demons. Once a sweet girl, Kelly is now a hardened and cynical monster-slayer. She joined Ash and Pablo in their quest to get her own revenge against the monsters that killed her family.

Hurd has also joined the season 2 cast as a regular character. She plays Linda, Ash’s childhood sweetheart, the typical one-who-got-away. She’s now married to a Sheriff, but there’s still some lingering feelings between them.

Original Evil Dead alum and producer (and Sam Raimi’s brother), Ted Raimi is back for season 2 of Ash vs Evil Dead. He is playing Ash’s quirky childhood friend, Chet Kaminski. A party-animal of sorts, he’s always up for helping Ash, hitting the strip club and breaking and entering.

Joining the cast this season is Lee Majors, who will play Ash’s father, Brock Williams. He’s the surly owner of a hardware store, but his business has suffered ever since Ash was labeled a killer. He spends his days relaxing at home or at a bar. When he hears that Ash is back in town, he’s not happy in the least. But we all know, deep down he loves his son.

Tobeck will be seen as the diabolical devil, Baal in the Ash vs Evil Dead season 2. Straight out of the underworld, Baal has a secret link to Ruby and is hell-bent (pun intended) to destroy Ash and his team!

The producers wanted to kill our wait, so they went ahead and released the Ash vs Evil Dead season 2 premiere episode already online!  You can watch it through the link below. The show’s television premiere will be on October 9 on the Starz network.