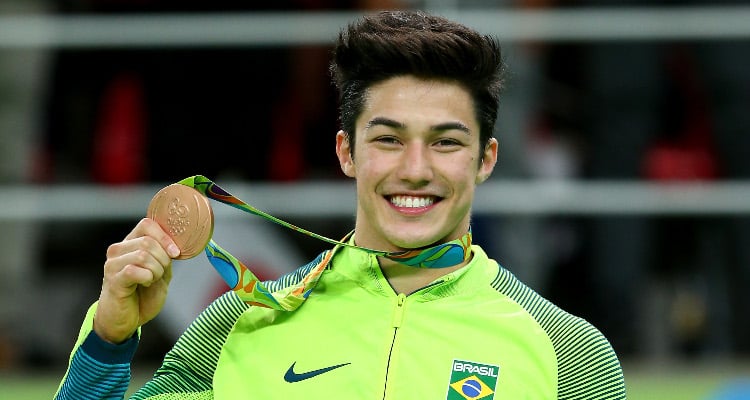 Gymnast Simone Biles is busting a move on Dancing with the Stars with her professional dancing partner, Sasha Farber. Besides having a thriving gymnast career, Simone’s love life is also said to be flourishing. Here is everything you need to know about Simone Biles’ “boyfriend” in our Arthur Mariano wiki.

At the age of only 20, Simone Biles has impressed the entire world with her outstanding performance at the Rio Olympics. There is no slowing down for the rising star, who is currently proving to be tough competition on Dancing with the Stars. Undoubtedly, Simone has earned many new fans because of her dancing skills. But, who is the 20-year-old gymnastics star dating? Simone Biles’ boyfriend is suspected to be Brazilian gymnast, Arthur Mariano. Here are four fun facts about Arthur Mariano.

Arthur Nory Oyakawa Mariano was born on September 18, 1993, in Campinas, Brazil. Growing up, he followed in his father’s footsteps and practiced judo. However, he decided to pursue gymnastics after watching a class. When Arthur’s parents got divorced, he moved to São Paulo with his mother and, at 11, became a part of the Esporte Clube Pinheiros gymnastics team. When Arthur was 14, he won the Brazilian Child Gymnastics Championship.

Rumor has it that the two have been together since the Rio Olympics. It all began in July 2016, when Simone posted a picture on Instagram with Arthur and captioned it “my Brazilian boyfriend.” Arthur also posted the picture on his account, captioning it “my U.S. girl.” They went on to clarify that they had grown really close during the games, with Simone telling Us Weekly, “We joke that we’re like international boyfriend and girlfriend because we see each other at these international meets, so I think that’s really cool.”

People were not convinced that they were just friends, as Simone posted a Snapchat video of Arthur at the dining hall before the Opening Ceremonies with “babe” sprawled across the screen. Fans had more to go with when Simone Biles met Zac Efron, and posted a picture of the actor kissing her cheek. Arthur then posted a picture of him with Simone, jokingly captioned “I saw her first…she is my girl.” Though they still maintain that they are just close friends, not everyone is convinced.

Arthur is on the National Team

The 23-year-old is a Brazilian gymnast and also a member of the national team. Arthur took part in the 2015 World Artistic Gymnastics Championships, where he placed fourth in the horizontal bar and 12th all-around. In the 2016 Rio Olympics, he won the bronze in floor exercise.

In 2015, Arthur was in the Midst of a Controversy

The year 2015 was a little hard for Arthur Mariano after he and his fellow gymnast friends, Felipe Arakawa and Henrique Flores were suspended for a month from the Brazilian national team. They uploaded a Snapchat video making racist jokes about their teammate, Angelo Assunção.

After the backlash following the video, the three took to Snapchat again, this time with Angelo. In the second video, they said that the incident was meant to be a joke, but they apologized for what they called a misunderstanding. In the video, Angelo maintained that there was “no problem” and the four gymnasts are friends.