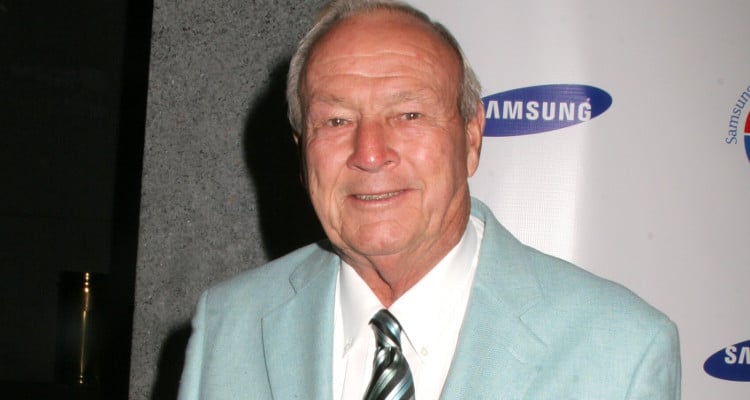 The “King of Golf,” Arnold Palmer died on Sunday afternoon (September 25) in Pittsburgh, due to complications from heart problems. CEO of Arnold Palmer enterprises, Alastair Johnson explained that Palmer was admitted to the hospital on Thursday, for cardiovascular tests. The news came as a shock to golf enthusiasts everywhere, as Arnold was a legend in the game of golf. Many are now curious to know more about the famed golfer and are looking to gain information on him. If you have been searching the Internet for terms such as, “Arnold Palmer wiki,” and “Arnold Palmer dies at 87,” then you have come to the right place because we will provide you with all the information you need.

Not only was Palmer considered to be one of golf’s greatest major sports stars, there is even a drink named after him! Many professional golfers were stricken by the news of Palmer’s death, and took to social media to express their condolences. Tiger Woods was obviously affected by the devastating news, and on Sunday night, he took it to Twitter and said, “It’s hard to imagine golf without you or anyone more important to the game than the King.” He further added, “Thanks Arnold for your friendship, counsel and a lot of laughs. Your philanthropy and humility are part of your legend.”

The world is shocked and saddened to learn about the loss of another talented sportsman, but the legacy Palmer has left behind will live on in the world of golf forever. For those of you who don’t know too much about Arnold Palmer and would like to learn more information on the “King of Golf,” we’ve compiled a list of five facts in our Arnold Palmer wiki below!

Arnold Daniel Palmer was born on September 10, 1929 in Latrobe, Pennsylvania. His parents are Doris Palmer and Milfred Jerome “Deacon” Palmer. His father taught him how to play golf. Arnold’s father suffered from polio. He was the greenskeeper and head professional at Latrobe Country Club. He would often accompany his father to his work place.

Arnold enrolled himself in Wake Forest College on a golf scholarship. However, upon hearing the news of the death of his close friend, Bud Worsham, he dropped out of college. After that, he joined the United States Coast Guard and served for three years, and after that, he returned back to college and won the 1954 U.S. Amateur. After this, there was no looking back and Arnold decided to make golf his profession, and soon became one of the most beloved professional golf players of all time.

Arnold has won several golf tournaments, including the PGA tour and champions tour. He is known as “King of Golf” and was inducted into the World Golf Hall of Fame in 1974. He also won the PGA Tour Lifetime Achievement Award in 1998. Arnold has won a total of 92 professional tournaments throughout his professional golfing career.

Arnold Palmer’s net worth is estimated to be around $675.0 million!

Although he known as the “King of Golf,” it has been stated that he earned only around $7.0 million during his entire golf career. He was an established businessman and has had numerous golf-related business ventures, which includes the Bay Hill Club and Lodge. Arnold’s company, “Arnold Palmer Enterprises,” also handles the licensing, endorsements, spokesman associations and commercial partnerships made for Palmer and McCormack. Hence, it is safe to say that not only was he an amazing golf player, but also an established businessman!

Arnold Palmer was married to Winnie Palmer for almost 45 years, until her death in 1999, due to complications from ovarian cancer. In 2005, Arnold re-married, to a woman named Kathleen Gawthrop. Palmer’s grandson, Sam Saunders is also a professional golf player. In one the interview, Saunders stated that Palmer’s nickname was “Dumpy.”

Although, Arnold Palmer has passed on, he has left behind a legacy that will ensure that future generations will know his name. We’d like to think he’s in a better place now, where the sun is shining and it’s always the perfect day to hit the fairway.