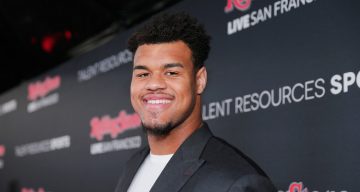 Arik Armstead is recuperating from an injury —something his new girlfriend could help him recover from. Mindy is a qualified doctor, who graduated from medical school last month and is enjoying some well deserved time off with her boyfriend.

Football defensive tackle, Arik Armstead is one lucky guy. He was the 17th overall pick for the San Francisco 49ers in the 2015 NFL Draft, and has a gorgeous doctor girlfriend by his side. Her name is Mindy, and she just finished medical school. We have all the details about Arik Armstead’s girlfriend, right here.

Arik Armstead is a defensive tackle for the San Francisco 49ers and played college football at Oregon. He was initially more interested in playing basketball, and led his high school team to several championships. In college, he played football and basketball, but became more passionate about football. Armstead has been with the 49ers since 2015, but has been sitting out since November 2016 due to an injury to his shoulder.

A Look Inside Dr. Mindy’s World

Being sidelined has not stopped Armstead from spending time with his girlfriend, Doctor Mindy, who is constantly seen by his side. Though the football player makes appearances on Mindy’s Instagram page, she uses the social media platform to give the world a glimpse into her own life. Give her a follow for some of Mindy’s hot pics!

Mindy wanted to be a doctor since she was eight years old. When she finally graduated, she described her feelings saying, “It still feels surreal …To know come June I have a job.. as a DOCTOR.. words can’t describe how blessed I feel.” Mindy believes in the power of effort and determination saying, “There is no force more powerful than a woman determined to rise.”

Time to Have Fun

Mindy finished medical school in April 2017 and is now spending as much time as she can with her boyfriend while he recovers. He sure isn’t complaining! We wish the couple all the best and hope Arik Armstead makes it back on the field soon!