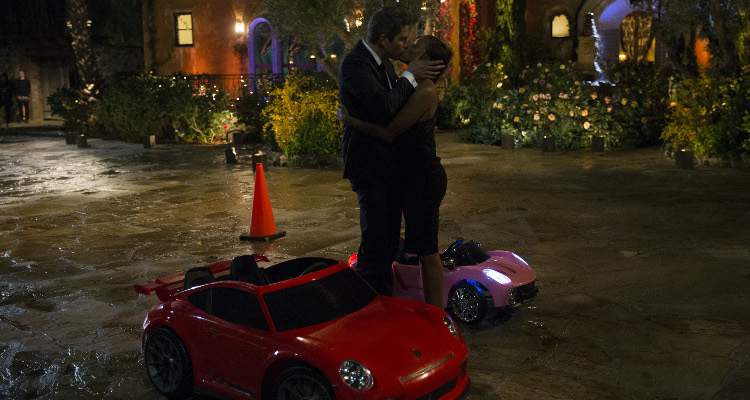 It’s 2018, Bachelor Nation! That means, it’s time to watch Arie Luyendyk Jr. get his second televised chance at love on The Bachelor, season 22! The reigning Bachelor has a notorious reputation as “The Kissing Bandit.” Why is Arie “The Kissing Bandit?” Read on to find out!

The Bachelor season 22 kicked off with some memorable (and cringe-worthy) limo arrivals. Bachelor Nation seems to be just fine with Peter Krauss not being the Bachelor, but none struck a chord with Arie more than Annaliese and her “Kissing Bandit” gimmick. Sure, it wasn’t that great of a night one entry, but with the amount of racing jokes, there had to be at least one jab at Arie’s image within the franchise! How did Arie land the smoochy nickname? We’ve got the scoop here!

Bachelor Nation might recall The Bachelorette season 8, which is practically decades ago in Bachelor time. Emily dumped Arie for Jef Holm, and the race-car driver threw himself into racing to get over his heartbreak.

Then, he has to hang out with Sean Lowe (whom Emily dumped for Arie), along with Lowe’s wife and kid, only to remind him that he’s alone and only The Bachelor can save his loveless life. Throw in Chris Harrison who reminds Arie that he’s getting old and has been a failure at relationships since being dumped by Emily, so he better make it work with the 29 ladies.

The Kissing Bandit is going to steal your heart in two weeks! #TheBachelor pic.twitter.com/wGaOUeUeAS

The women arrive packed with racing pickup lines. Among the many underwhelming limo arrivals, 32-year-old Annaliese covers up her lack of chemistry with Arie with a mask and proclaims she’s the “Kissing Bandit.” She barely makes a lukewarm impression and her attempt to snag the first kiss of the season failed. That honor went to Brittany T., whose fun-sized cars made a much better prop!

But props to Annaliese for joking about something other than racing! We were waiting for the first mention of the Kissing Bandit this season and we’re sure it won’t be the last. Arie, after all, has a reputation to uphold!

But how did he build a reputation in the kissing department? For the newly initiated, and those who need a refresher, Arie’s nickname came about in exactly the way you’d imagine. He was simply very good at sneaking kisses from Emily during her season on The Bachelorette.

Some of them were completely unexpected and totally welcome. His ingenious dexterity in the art of lip-lock is so visually enticing, Bachelor Nation even flooded a popular YouTube video of Arie’s kiss compilation with views, ever since he was announced the new Bachelor.

It wasn’t just about sneaking in a smooch or two when Emily was least expecting it. Bachelor Nation determined he’s a good kisser, at least, he visually looks like one! He never returned to the franchise or its spin-offs until now, but he did make an appearance to give Sean Lowe tips on kissing during his season of The Bachelor. You’d be a fool to not take Arie’s advise in this field!

Now that he switched gears from contestant to Bachelor, we’re sure he’s going to stick to his moniker to “test” his chemistry with the ladies. He’s already kissed Brittany T. and Chelsea on night one. He claims that as long as he can find the chemistry that he did with Emily, there’s no reason we won’t be seeing him put his kissing skills to use!

Watch Arie stick to his sultry nickname in The Bachelor season 22, Monday nights at 8:00 p.m. EST on ABC!