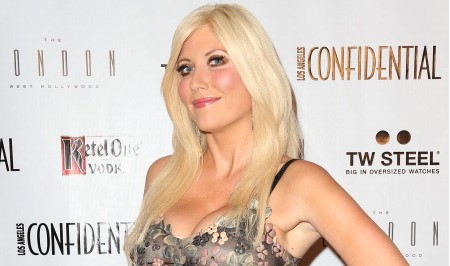 Who is the actress that has accused Entourage alum, Jeremy Piven of sexual misconduct? The Ariane Bellamar Fox News story comes on the heels of the rash of sex scandals in Hollywood, now including Kevin Spacey. To get the scoop on the actress, here’s our Ariane Bellamar wiki.

Ariane Bellamar’s age is 38 and although she was born in Florida, she was raised in a small town outside Toronto, Canada. She’s not a well-known actress and has been married to a First Responder instructor named Tanner Slaught, who is Canadian and lives in Toronto. They have been married for two years and have two young children: Daughters, Emma and Melitta.

She was on Suicide Squad

Ariane Bellamar’s Suicide Squad scene as one of the Joker’s strippers wasn’t very important and it was eventually cut from the edited version. She was a day player on set, in a scene where she once accused Jared Leto of rubbing his crotch outside of his pant at her, before the cameras rolled.

“He wasn’t hiding it or anything,” she told RadarOnline.com in an exclusive interview. “He did it every time he walked past me.”

She originally laughed off the incident but revealed she was disturbed by it.

“I’m not a prude, I’m easy-going,” she insists. “But it was creepy. It took me completely off guard.”

A spokeswoman of Leto’s denied the claims saying, “There is absolutely no truth to this.” The rep told Radar, “It’s completely false.”

Despite criticizing Leto for his behavior, the actress took to Facebook to comment on his deleted scenes.

“As disappointed as I am that my scene with ‪#‎thejoker was not included in the final theatrical release, my heart truly goes out to Jared Leto, who’s devotion to his character was so obvious on set, it literally freaked me out!” she wrote on August 8. “It must be devastating to watch your hard work & dedication whittled down to 15 minutes of screen time With that being said, working opposite of Mr. Leto was an opportunity of a lifetime & I’m appreciative to have had the chance to learn from such an inspirational talent.”

The Real Housewives of Toronto

Was Bellamar fired for being pregnant at work? According to Ariane Bellamar’s Instagram, the reality star alleged that the producers fired her for being pregnant! She was thrilled to have her child’s labor be a story line for the Canadian spinoff’s first season but things didn’t go as planned with scheduling.

“So, here’s the skinny. In short, I was let go after my doctor moved up my c-section date by a week, which would conflict with an all-wives trip planned to “cottage country”, she said. “The show expressed concerns about this change, at a July 13th lunch shared by myself & producers @greschukg & Erin Haskett, mostly as it would make me “not relatable” to the other women if I missed the trip & “isolated” from the other women following the baby’s arrival.”

The Wisdom of the Crowd star has been accused of sexually assaulting Bellamar, who took to Twitter to make her claims.

“‘Member when you cornered me in your trailer on the #Entourage set? ‘Member grabbing my boobies on [sic] the without asking??”

She continued: “‘Member when I tried to leave; you grabbed me by the ass, looked at yourself in the mirror, & said what a ‘beautiful couple’ we made?”

Piven has yet to comment on the alleged assault and the news comes on the heels of Kevin Spacey’s scandal, which actor Anthony Rapp claimed happened 30 years ago.

My #halloween costume sure made a splash at Emma’s #halloweenparty! hehe ?? #ivankatrump #complicit