The been a lot of media buzz surrounding Ariana Grande’s personal life, especially since she suddenly got engaged last week to Pete Davidson! Given Ariana Grande’s dating history and he recent breakup with long-time beau Mac Miller, the news came as quite the shock. People are still asking, “Who is Ariana Grande dating?” especially since it seems the quick engagement has left people scratching their heads!

To say that Ariana Grande has had a lot of high and low-profile relationships over the past few years is a massive understatement. Since her days of being a seemingly innocent Nickelodeon star, Grande has been romantically linked to some of the biggest names in music, including Mac Miller, Big Sean, and even Justin Bieber—although that last one appears to be mostly speculation.

Grande has also been known to get together with her male backup dancers, which isn’t all that surprising considering they probably spend a great deal of downtime together between shooting music videos and going on tour. While it may seem like Ariana Grande’s dating history is a complicated one, there is no one happier to take her off the market than her new fiancé!

Pete Davidson appeared on Jimmy Fallon earlier this week to discuss his sudden proposal, and he was a coy and hilarious as usual. If he’s as funny in real-life as he is on our TV screens, there will be plenty of laughter in their marriage! Check out the clip below.

Since the singer will soon change her pronoun from Miss to Mrs., we thought it would be appropriate to take a brief look at Ariana Grande’s dating timeline to explore her past relationships—both rumored and confirmed—in depth.

As you can see, Ari has a very distinct list of past lovers, and in some cases, her romance timelines even seem to overlap quite a bit. Of course, there are quite a few other men she’s been spotted hanging out with over the years, but these are the main ones that are worth mentioning. So, let’s get started with the relationship breakdown!

Believe it or not, the singer and funnyman actually haven’t known each other very long at all and they’re already engaged! The couple were confirmed to be dating in May 2018 and announced their engagement just a few short weeks later. (However, they could have been dating longer and just kept it under wraps.) 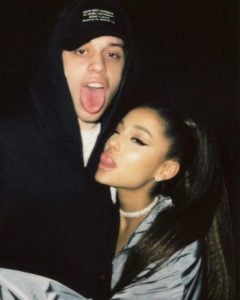 Talk about not wasting any time! It’s obvious that the No Tears Left to Cry singer and the SNL cast member love each other immensely and just couldn’t wait to share their affection with the rest of the world.

In the beginning, this relationship was speculated to simply be a rumor because of the fact that both Grande and Davidson had just gotten out of other relationships just a few days before announcing that they were dating. To announce her newfound love, Grande posted an adorable photo of herself and Davidson to Instagram, in which he’s holding her from behind and kissing her temple. The picture was captioned, “I thought you into my life.” She even wrote a song about him entitled Pete for her new album, Sweetener.

Mac Miller, Together for Years

Back in 2013, Mac Miller and Ariana released a hit song together called The Way. The pair shared what appeared to be an overly passionate kiss in the music video accompanying that song, and that’s when the rumor mill lit up with stories about them dating. 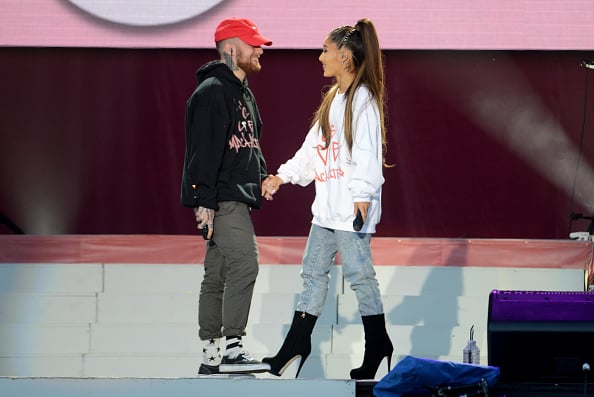 Of course, the couple vehemently denied those rumors initially, but then started dating about three years later anyway! They officially started dating in August 2016 and went strong until their eventual heartbreaking breakup in May 2018. One of the reasons cited for their breakup was that Mac allegedly had drinking problems and Ari didn’t want to stick around for that.

Big Sean, Dated for One Year 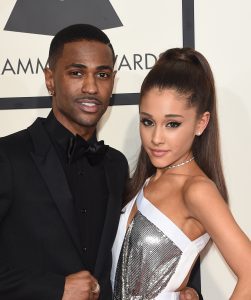 Ariana Grande and Big Sean attend The 57th Annual GRAMMY Awards Credits: Jason Merritt/Getty ImagesBig Sean and Ariana Grande collaborated on a few big hit songs together, including Right There, Research, and Best Mistakes. They made such great music together that fans were really shipping them hard! This was a couple people wanted to see get together! Well, it must’ve worked because, much to the elation of their fans, the pair announced that they were dating at the 2015 Grammy’s.

Unfortunately, they split up later that year, citing that their schedules were just too conflicting and hectic.

Justin Bieber, Rumored to Have Dated

Much to the dismay of Beliebers and Arianators everywhere, Justin Bieber and Ariana Grande were, in fact, just really good friends. Although, judging by some of the Instagram pictures they’ve both posted with each other, it’s easy to see why some people might have thought otherwise back in 2015! There was one picture in particular that truly convinced fans that the current reigning king and queen of pop were an item. Ariana posted a snap of The Biebs coyly giving her a kiss on the cheek, and that sparked rumors that they were romantically involved.  But both parties strongly denied it. To this day, those rumors have never been corroborated and both Grande and The Biebs insist that they are just close friends and have never been anything more than that.

This relationship was quite possibly one of these most tumultuous pairings that young Ari would ever experience in her life. The 24-year-old pop superstar got together with singer and YouTube sensation, Jai Brooks back in 2012. This marked the beginning of their two-year on-and-off again rollercoaster ride of a relationship. 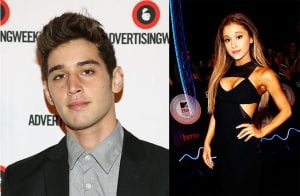 It ended badly in 2014 when allegations of Ari’s unfaithfulness came to light. She was allegedly cheating on him with singer Nathan Sykes from The Wanted. Of course, Brooks also reportedly played a hand in the demise of their relationship when he apparently failed to comfort Grande after the passing of her grandfather. Arianators practically attacked him all over Twitter in support of their beloved singer!

Nathan Sykes, The Alleged “Other Man”

After recording one love song after another together and performing numerous duets, it’s not surprising that these two developed a romantic connection with one another. According to reports, Sykes was one of the many reasons that Jai Brooks and Ariana Grande just couldn’t make their relationship work. Unfortunately, this one didn’t last very long either, as the two performers had very busy schedules that were always conflicting with one another. 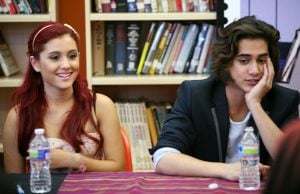 Avan Jogia and Ariana Grande never actually dated and neither did their characters on Victorious. However, they shared an incredibly passionate and convincing onscreen kiss during one episode of the show entitled A Film by Dale Squires that it had their fans begging for more action between these two!

Unfortunately, their wishes never came to fruition, but Grande and Jogia did remain very good friends. In fact, she admitted that he was “intense” and a “good kisser.”

Graham Phillips of The Good Wife and now Riverdale fame was apparently Ariana Grande’s first boyfriend. The two met in 2008 when they were both starring in the Broadway musical production of 13. 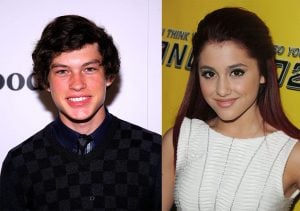 At first, they were just friends, but after working together very closely for long stints of time and sharing those passionate on-stage kisses, it was clear sparks were there. It was then that they decided to officially start dating and kept it strong for a whopping five years!