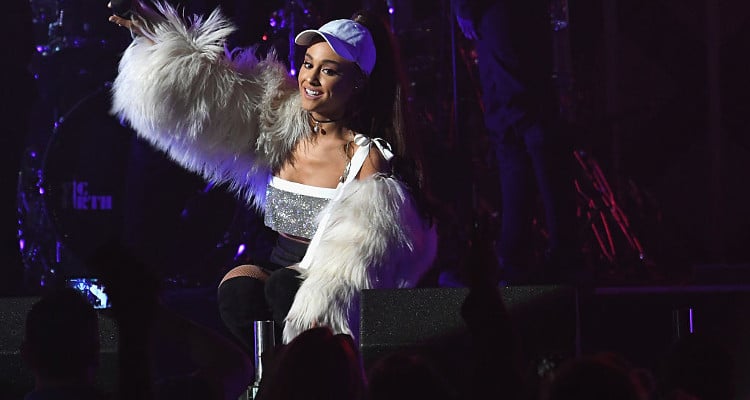 The iHeartRadio Jingle Ball tour goes from city to city when the holiday season begins, and entertains audiences with some of the biggest names in music. The 2016 iHeartRadio Jingle Ball is packed with the most popular artists of this year. More than 30 artists are scheduled to perform, including Fifth Harmony, Justin Bieber, Niall Horan, Diplo, Charlie Puth, Ellie Goulding, and Lukas Graham. It’s no surprise that Ariana Grande wowed the crowds with her performance at the Jingle Ball! It’s something you don’t want to miss! You can still catch her performance during the last three concerts, or watch it on television.

Ariana Grande Brings Christmas and Chill to the Stage

Ariana Grande made her Jingle Ball debut this year performing songs from her latest album, Dangerous Woman. KIIS-FM’s Jingle Ball at Madison Square Garden was one of the stops of the iHeartRadio tour and everyone was raving about it. After a long break, Justin Bieber returned to the iHeartRadio stage with artists such as Meghan Trainor, who had to cancel her first few appearances of the tour due to health reasons.

Grande sang hits “Side to Side,” “Dangerous Woman,” “Into You,” and “Be Alright,” along with a medley of holiday songs from her 2015 EP, Christmas & Chill. Grande is fresh off the filming of NBC’s Hairspray Live, where she played Penny Pingleton. Her songs “Winter Things,” “December,” “True Love,” and “Wit It This Christmas” set a festive romp, but what was sweeter is her backstage rendezvous.

Grande’s family and brother were there to cheer her on from backstage. But besides sharing a few hugs and kisses with her family, Grande posed for a selfie with none other than Hugh Jackman! The star even posted a thank you message to Grande on Instagram for making him the “cool dad.”

@arianagrande aside from the fact that you're awesomely talented… thank you for (unofficially) making me a cool Dad. @iheartradio @republicrecords

Ariana Grande to Perform in Atlanta

Hurry and buy your tickets for the final shows of the 2016 Jingle Ball Tour at Ticketmaster before they’re sold out.  For every ticket purchased, the concert donates $1.00 to the Ryan Seacrest Foundation, which works to inspire youth through entertainment and education-focused measures.

If you missed the chance to watch your favorite artists perform live, there is no need to fret! You can still catch the performances on your TV. The CW is airing the iHeartRadio Jingle Ball December 9th show. The first 90-minute special aired last night (December 15) at 8:00 p.m. EST. If you’ve missed it, you can still watch it when on December 26 at 8:00 p.m. EST only on The CW.