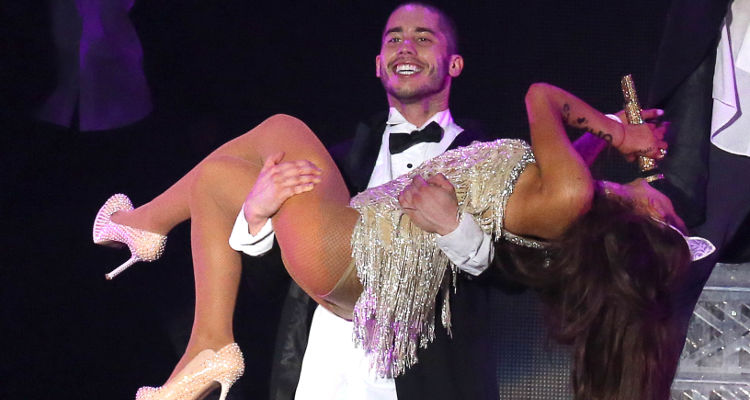 Ariana Grande fans have been speculating about the star’s romantic status for a while now. A few weeks ago, fans were left guessing whether the 23-year-old songstress had broken up with her backup dancer beau, Ricky Alvarez. Sending the fans into a spin further, Grande was seen snuggling 24-year-old rapper and record producer, Mac Miller at the MTV VMAs 2016 on Sunday night!

In July, the rumor mill went abuzz over Grande’s apparent break-up with Alvarez. Grande had tweeted a series of cryptic messages from which fans concluded the pair had broken up. Following the break-up, Grande was spotted kissing Miller in a restaurant in early August. The pair have also been spotted on numerous one-on-one dates together this month, as well.

Miller had joined Ariana and her fellow songstress, Victoria Monet to a trip to Disneyland in July. The stars even got tattoos together a few days before the VMAs. And no, they were not “couple tattoos” as many assumed, but they did go together to get them done.

Grande hasn’t openly confirmed that she is dating Miller, but the pair didn’t shy away from some PDA at the VMAs this Sunday. Grande had strutted on the red carpet solo, but she did gush about her rumored boyfriend in an interview. She was later spotted in the audience getting cozy with Miller. Grande was even seen giving Miller a kiss on the cheek, while he had an arm around her at the show. Later that night at the after party, Grande and Miller arrived hand-in-hand and looked very much smitten with each other!

This isn’t the first time the two have been linked together. Miller was the featured rapper in the singer’s 2013 single, “The Way’. Back then, the two were linked together but Grande stated that they were just friends then. After that incident, she had gone on to date Big Sean and Nathan Sykes and subsequently, Ricky Alvarez.

The 23-year-old singer has had a few ups and downs in the dating department, but always parted with her boyfriends on good terms. Miller and Grande have shared a close friendship for a while. Whether they are officially a couple or not is yet to be confirmed. However, it is clear that the stars are very close to each other and fans agree they make a cute couple in love. And what better way to start a relationship than beginning as besties? Stay tuned to find out how if this love story blossoms!