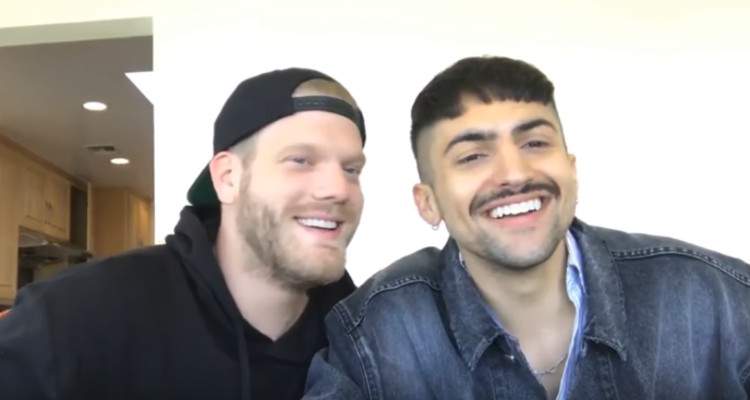 The Grammy-winning a capella group, Pentatonix is known for their covers of popular songs, and fans just can’t get enough of them. Each member has a unique voice, and after their Christmas special aired, people want to know more.

A Very Pentatonix Christmas is already out, and the group just released a video for their “Deck the Halls” cover. Pentatonix’s combined $40.0 million net worth was earned through their combined efforts of recording new songs and releasing various videos on YouTube. With fans waiting for Kirstin Maldonado and her fiancé Jeremy Michael Lewis to tie the knot, speculation into the love lives of the other members is rife. Are any of the Pentatonix members gay? Read on to find out!

Who is gay in Pentatonix? Mitch Grassi and Scott Hoying are the only gay members in the group, and are strong supporters of the LGBTQ community.

Grassi went to school with Maldonado and Hoying, and the three formed a group before Pentatonix. In an interview, Grassi spoke about how his influence on fans has impacted their lives, as well as the lives of their loved ones:

“They love our music and I’ve gotten people saying, parents especially, ‘You guys helped me accept my gay son, my gay daughter,’ and I think that’s really cool. It’s a weird way to ease people into opening their minds a bit, because we’re not doing anything crazy or outlandish with Pentatonix, but by simply being our true selves, we’re opening people’s eyes a bit.”

Grassi and Hoying have a side project where they make music with instrumentals, and they regularly post videos on YouTube. “With Superfruit, it’s a little more gay-friendly and a lot more open, more sexual, more liberated,” revealed Grassi.

Just like his former bandmate, Avi Kaplan, he does want to go solo someday, but is taking his time. “Now it’s just a matter of figuring out what I want to do as an artist. I’m on this weird trajectory where I’m learning my own creative process through working with other people, and I think ultimately in a couple years I’m really going to know with certainty what my artistic direction is,” he said.

The group’s baritone is also out of the closet, and has been involved in music since he was little.

“I think that Mitch is just insanely talented. He’s hilarious, so goofy, so humble. Like, he doesn’t act humble, but he actually is really humble. And someone who is talented is not usually that way. I’m not that way,” he said about his childhood friend.

On the Superfruit channel, Hoying and Grassi toy with the fans about their relationship. As fans regularly ask if the two are dating, a fan account compiled clips of their almost kisses from their previous videos. Despite what people hope, they have confirmed they are just good friends, and have been for a long time.

Details about who Hoying is currently dating (if he is) are unknowm. His goal with Pentatonix and Superfruit is to motivate people with their songs because “I feel like we can relate to our generation and inspire people to work hard and chase their dreams.”