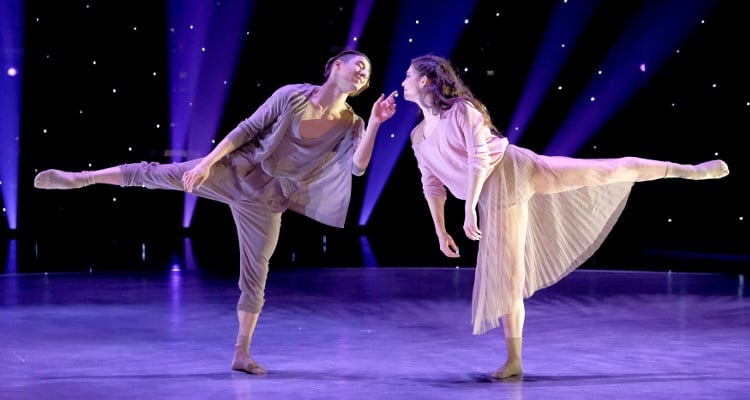 Another reality dance show is coming to a close. Monday’s penultimate episode proved sad for some contestants as it’s down to the wire for the final four! But for Lex Ishimoto and Taylor Sieve, the So You Think You Can Dance stage seemed to spawn more than just choreographic chemistry! Now, fans are wondering if their rumored romance will continue following the season finale. Are Lex and Taylor from SYTYCD dating? Keep reading!

Right now, the final four contestants are working extremely hard to win season 14 of SYTYCD. Koine Iwasaki, Lex Ishimoto, Taylor Sieve, and Kiki Nyemchek are the last contestants standing, with just one episode to go until the winner is named!

Though fans do not want to have to wait so long for the show to return, they are looking forward to seeing more of one SYTYCD couple, Lex Ishimoto and Taylor Sieve, after the finale airs. Rumors about Ishimoto and Sieve romance have been circulating for well over a month now. After seeing the two on stage, and checking them out on Instagram, fans of the show are wondering if Lex Ishimoto and Taylor Sieve are dating and what their status is now. Find out if the on-going speculations are true!

Originally, it was just a rumor that the two participants fell for each other but now, it seems the rumors have been confirmed! According to reports, Sieve let the cat out of the bag on her Instagram account, as she has posted pictures referring to Ishimoto as her “love.” Though it might seem like it was So You Think You Can Dance that initially brought the two together, the two had actually met before. In an interview, Sieve revealed that she met Ishimoto a year ago at the Dance Awards National. The convention’s owner hired them to go on tour. But it sure looks like dance really brought this adorable couple together in more ways than one!

Can't believe this was over a month ago. And look at where we are now. So grateful to have you @lex_ishimoto ?? #discovibes

Ishimoto and Sieve are competing for the title of America’s Favorite Dancer on the So You Think You Can Dance stage, but many felt the chemistry between the two went far beyond their dancing. Their affection for each other is borderline palpable when you see some of their routines, which was initially what sparked their dating rumors!

And then there’s Ishimoto’s Instagram! Ishimoto does not shy away from posting pictures with Sieve, captioning photos with loving messages like, “Always winning when I’m with you.” (Which also added fuel to the fire of these relationship rumors!)

Lex and Taylor on So You Think You Can Dance

Always winning when I'm with you.

Aside from their rumored romantic relationship, Ishimoto and Sieve’s dance routines are what have people talking!  Their most recent dance routine was magical, romantic, and left everyone spellbound. Talking about their amazing performance, Nigel Lythgoe said that it was “one of the best dance routines ever on So You Think You Can Dance — no more words than that.” Vanessa also added, “I would pay good money to see that on Broadway because that was phenomenal. This is an insane duo.” Their dance showcased their amazing skills and romantic chemistry. Mary Murphy was really happy with their performance saying, “There’s nothing to hate about that number, it’s nothing but love. I loved the concept too, it was really great.”

After their splendid performance, Ishimoto took to Instagram and wrote, “I got to share the stage two days ago with my lady. What an experience and a special moment it was. Been watching her kill it every week on this show so when I found out i had her I knew I had to pull up. Thank you for dancing with me and sharing a such a special moment with me. Till next time we dance together again my beautiful bird.”

Ishimoto and Sieve definitely make an adorable couple and we wish them both the best of luck in the finals! Make sure to watch the So You Think You Can Dance finale next Monday at 8:00 p.m. EST on Fox!