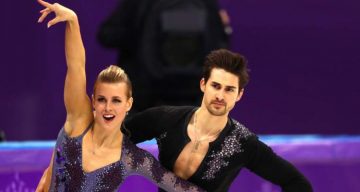 People who witnessed the palpable chemistry between Madison Hubbell and Zachary Donohue on the ice at the Winter Olympic Games 2018 can’t help wonder if they’re a couple in real life, too. The truth is, that even though they dated for two-and-half years, they broke up to focus on their sport and compete in the Games.

Madison Hubbell and Zachary Donohue are battling it out in Pyeongchang, South Korea, as they face intense competition, not only from competitors from other countries, but also from their own. However, the couple is giving it their all in their first Olympic Games.

There’s one thing people have noticed about the couple and that’s their chemistry both on—and off—the ice! This has obviously had many wondering about their romantic status; are Hubbell and Donohue are couple? They seem to be so in tune with one another, that some even think that Hubbell and Donohue are married! We’ll tell you all we know about this charming ice dancing duo and their status, right here.

Hubbell and Donohue are not married, nor have they ever been. They first teamed up in 2011, and their respective coaches immediately saw their chemistry and pushed for it.

Those who see the couple so at ease with each other on the ice will be surprised to know that, at first, they hated being with each other! Donohue remembers, “We had competed against each other, we were very opposite people, and we literally loathed each other. I had to take her hand, and she was like, ‘I really don’t want to skate with this dude.’”

Together for a While

The couple then dated for two-and-half years, and people loved their chemistry both on and off the skating rink. However, ahead of the Winter Olympic Games 2018, the couple thought that it was best to split up. However, it did not deter them from going for gold!

Too Much of a Good Thing

Donohue explained in an interview, “To work harder and do all of these things right, we just realized that to date and be with each other 24/7 with our particular personalities was just explosive.”

Hubble added, “We weren’t able to keep our focus where it needed to be. We had to ask ourselves what was more important, our on-ice partnership or our off-ice relationship? And we both very clearly said the on-ice partnership is No. 1.”

So, they broke up and put all their focus on their training and preparation for the 2018 Winter Games.

But that’s not the end of their love lives by any means, as both are reportedly dating other skaters! Hubbell is with Spain’s Adrian Diaz, while Donohue is in a relationship with Olivia Smart. The funny thing is; the four reportedly live and train together in the same house in Montreal, Canada! (Awkward much?)

Both Hubbell and Donohue were totally focused on winning a medal at the Winter Games and making their country proud. They almost won bronze, but were edged out fellow U.S. skaters, the Shibutanis! It didn’t matter, though; each performance they gave at this year’s Olympic winter games made their country very proud!