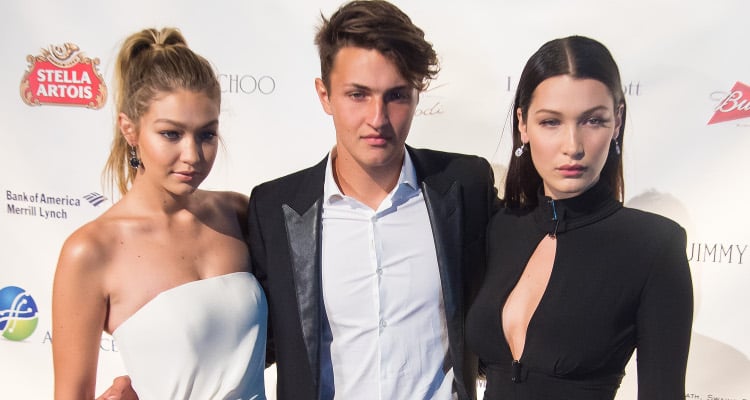 Anwar Hadid, Gigi Hadid’s brother, is making a name for himself in a photo spread for the latest issue of Vogue Hommes. The photos were taken by Collier Schorr and his look was styled by Beat Bolliger. The 17-year-old appears to be in his element in front of the camera. He also appeared on the cover of Teen Vogue June/July 2016. For more facts about the brother following his sister’s footsteps, here is our Anwar Hadid Wiki!

His Father is a Los Angeles Realtor

Anwar Hadid was named after his Nazareth-born father, Mohamed Anwar Hadid, on June 22, 1999. His father is of Palestinian origin and works as a Jordanian-American real estate developer. He is mostly known for building luxury mansions and hotels in the Bel Air neighborhood of Los Angeles and Beverly Hills, California. His net worth is estimated at $100.0 to $200.0 million! Mr. Hadid is not new to the spotlight, as he’s made appearances on the TV show, The Real Housewives of Beverly Hills and Shahs of Sunset. Anwar Hadid is the third child of his father’s second marriage to Yolanda Hadid, however, the couple divorced in 2000.

Anwar Hadid has two sisters who are also models: Jelena Noura “Gigi” Hadid (born in 1995), who is possibly the most famous of the three, and Isabella Khair “Bella” Hadid (born in 1996). Most people who hear the name “Hadid” think of Gigi. She is an American fashion model and television personality, and is currently in a relationship with another Hollywood hottie, the former One Direction singer, Zayn Malik. As for Bella Hadid, she is also an American fashion model, signed to IMG Models like her older sister.

It seems like the Hadid siblings are naturals on social media. They know how to take the perfect selfies, how to take birds-eye view shots of their outfits, and how to pose with their “squads.” Anwar Hadid’s Instagram has almost 850,000 followers, and his Twitter account has over 65,800 followers!

According to GossipGirl.com, Anwar Hadid knows how to win a woman’s heart. He said, “I’m comfortable around girls because I grew up with two sisters and a single mom. I feel very lucky for all they have taught me.” He’s only 17 now but let’s hope he maintains that great respect he has for women as he gets older!

“My family is my foundation. My sisters are awesome; they probably taught me everything I ever need to know about girls,” he said in an interview with Nylon. He continued to talk about his mother’s liberal style of child-raising, but also her switch to old-fashioned respect when it comes to manners. He said, “She taught me to always be kind and treat others with respect.”

Well, with lessons like that, we have high hopes for the youngest Hadid!