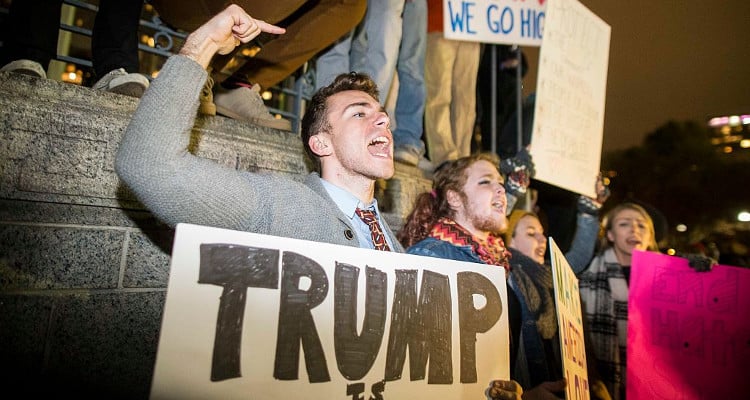 An anti-Trump protest in Los Angeles spilled over to the 101 freeway. The protest has turned ugly, blocking traffic and causing the police to shut down lanes.

Donald Trump winning the presidential election has triggered massive anti-Trump protests across the United States. Thousands of demonstrators hit downtown Los Angeles late Wednesday (November 9) to protest against president-elect Donald Trump’s new position. The protest became chaotic when the demonstrators crossed city streets and spilled onto the 101 freeway. Traffic was blocked and many people were trapped on the freeway, forcing authorities to take matters into their own hands. The police had to shut down the 101 freeway to contain the mob and help those who were stuck. Watch the latest developments of the L.A. 101 freeway protests live.

You can find the latest news about the 101 freeway protests and watch what’s going down in Los Angeles right now in the video below.

What Happened in Los Angeles?

Thousands of anti-Trump protesters took to the streets to express their dissatisfaction of Donald Trump being elected president. Demonstrators chanted “Not my President” while holding anti-Trump signs. It started as a peaceful march, but turned violent in a matter of time. There were even instances of flag-burning reported. At one point, an effigy of Donald Trump was also burned. Protesters even climbed on top of bus stop awnings and traffic poles.

The crowd had first gathered in front of City Hall reportedly following a Facebook post. It was set out to be peaceful, but disorganized with no start or end point. When the protest spread to the northbound lanes of 101 freeway, the L.A. Police Department and California Highway Patrol had to intervene.

Traffic was blocked as the crowd of protesters were contained by police, who shut down freeway lanes to contain them. Authorities were clad in riot gear as they warned the protesters, and directed motorists to return to their vehicles. The LAPD revealed that at least 13 people were arrested.

The anti-Trump demonstration turned into a stand-off between the police and the protesters. While the protesters didn’t heed the police’s warnings, the LAPD and CHP formed a perimeter and brandished rubber bullet guns to prevent more protesters from entering the freeway. The crowd was mostly confined to the freeway on-ramp near Union Station.

The police eventually controlled the situation. Crowds that had gathered around 7:30 p.m. had dispersed by 11:15 p.m. No word has been given yet on when the LAPD will reopen the freeway.

Anti-Trump Protests Across the Country

The L.A. protest was one of many such anti-Trump demonstrations that were triggered by Trump’s upset victory over Hillary Clinton. Several protesters marched to Trump Tower in New York City and protests in Seattle ended with a mass shooting incident (though, reports now say was unrelated). Protests were also reported in Oakland, San Francisco, and Boston, among other locations.