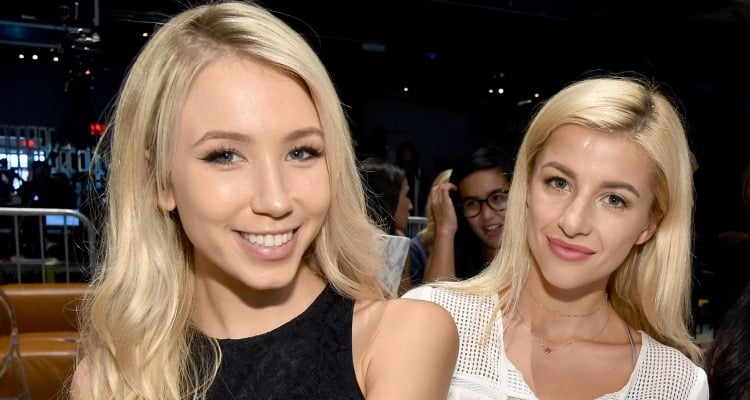 Kalel Cullen is a fairly big Youtuber, who’s gained quite a bit of attention for her online content, and for being Anthony Padilla’s girlfriend. Padilla is one half of the wildly successful YouTube channel, Smosh. The pair dated for three years before getting engaged in June 2013, but unfortunately Kalel and Anthony broke up just over a year later, in December 2014. Their break-up came as a surprise to fans, as the couple shared a vlogging channel where they would document their everyday life, and include their followers in their relationship as much as possible.

This YouTube star has an adorably cute baby face, which often leads to the question—how old is Kalel Cullen? Despite her baby face, we knew there was no way she’d still be a teen after a four-year relationship and almost tying the knot! She was born on March 31, 1989, making her 28 years old this year. You’d never be able to tell by just looking at her, though; she definitely still has that young teenaged vibe about her!

Kalel Cullen’s YouTube account had quite a large following on her first channel, queenbeeuty, which she started in 2010. However, the 28-year-old is known for re-inventing herself and starting over on YouTube every so often, with a new channel and a new idea. In fact, she’s quite famous for deleting all of her old content when planning to introduce a new style or theme for her personal brand online. Despite the fact that she has a large following on her beauty channel, Kalel posted a final video revealing that she’d be shutting it down—and just five months later, queenbeeuty was deleted.

whenever i don't know what to wear, i just go for my "cat woman suit" ? | ?: @danapenningtondotnet

Fortunately for her loyal followers, Kalel had a second YouTube channel, KalelCullenTV, where they could continue to keep up with her. She posted lifestyle, vlogs, and advice videos on this channel, but it never gained the traction that her first channel did. Not long after she began posting on KalelCullenTV, she announced that she’d be moving to another channel, yet again. Cozplai, where she planned to publish tutorials on how to make cosplay costumes for her favorite characters, would be her new home on YouTube. However, Cozplai didn’t gain many followers in its lifetime—she amassed just under 100,000. Soon after realizing that this channel wasn’t much more successful, Kalel told fans that the channel was too much upkeep, and abandoned it.

The Ups & Downs of the Vlog Life

In 2012, she launched yet another channel. WonderlandWardobe consisted of DIY fashion and lifestyle videos, as well as vlogs. This channel was quit a success, gaining over 400,000 followers by 2013. However, Kalel later announced that she intended to pursue a career in the fashion design industry and wouldn’t have time to continue posting on the channel. As such, it came as a bit of surprise when she started another channel that same year with then-boyfriend, Anthony Padilla. The couple’s blog channel was around until the end of their relationship, and had an impressive 1.7 million followers before it was shut down. Kalel later started a new channel, called Frilly and Fancy along with an accompanying blog. However, Kalel Cullen’s blog and DIY and fashion YouTube pages have since been abandoned. As of 2016, she has a channel simply named Kalel, which is still active today.

Even with all of the hopping from one channel to another, Kalel Cullen’s Twitter has remained active. Fans have also been able to keep up on Kalel Cullen’s Instagram page, and get updates on the social media socialite’s life. In spite of her rocky YouTube career, Kalel has kept active on other social medias and earned herself a loyal band of followers—so loyal in fact, that Kalel’s net worth is now approximately $900,000!

With the frequent upheaval of channels and themes, you can probably tell why there’s some controversy surrounding this YouTuber. In addition to her flakiness when it comes to establishing a blog and channel, she also came under fire in 2010 when rumors of her real name surfaced. Kalel Cullen’s real name is actually Kristin Smith, and the name she’d been going by online was a pseudonym she made up by combining names of characters from Superman and Twilight. We know what you’re thinking—she used a fake name online, what’s the big deal? Well, it wouldn’t have been that big of a deal if she didn’t create an entire blog post criticizing fellow beauty gurus Elle and Blair Fowler for lying about their names! A bit hypocritical, no? After fans found out about her real name and the fact that she lied about the entire backstory of her parents meeting at a comic convention and being of Scottish descent, they were less than impressed.

oh, how very myspace of me

She Stands Up for PETA …Or Does She?

Kalel Cullen’s PETA ad also generated a lot of controversy online. She made her stand on veganism and animal rights very clear, and is known for being vocal on issues of injustice towards animals. She even did an ad campaign with PETA, denouncing the use of down in jackets and bedding! However, many were quick to discredit her by mentioning she’d promoted non-cruelty-free brands like Mac and Lancome, and reminding her that she’d refused to be vegan on her tour of Europe, since she didn’t want to “miss out on the cultural experience.”

Despite the rocky times the Internet has seen her through, it seems as though nothing can get Kalel Cullen down. Single and (hopefully) ready to mingle, we can’t wait to see what this YouTuber has in store for viewers in the coming months! Maybe a new channel…again?