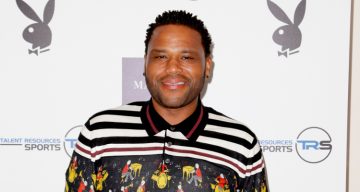 Anthony Anderson has had a rewarding career in both television and films over the last two decades. He will be a special presenter at the 2017 Teen Choice Awards. Anderson married his college sweetheart, Alvina Stewart, and is the proud father of two adorable children. With a net worth of $18.0 million and a loving family behind him, Anderson looks poised for bigger and better things.

Anthony Anderson has been invited to be a special presenter at the 2017 Teen Choice Awards this Sunday, August 13, 2017. At Anthony Anderson’s age of  46, he is a married man with children of his own. Though better known in an older audience, some might wonder who Anthony Anderson is. Keep reading for some details from Anderson’s wiki.

He Didn’t Give Up

Born on August 15, 1970, in Compton, California, Anderson is an actor, comedian, writer, and game show host. He regularly appeared in film and TV since starting his entertainment career in 1995. Anderson enrolled at Hollywood High School Performing Arts Magnet and graduated in 1988 before attending Howard University. Although his first attempt at stand-up comedy was a failure, he did not lose heart and continued to perform on stage.

Anderson first got work in television with shows like Hang Time, All about the Andersons, The Shield, K-Ville, Law & Order, Guys with Kids, and To Tell the Truth. He made appearances in a few episodes of shows like NYPD Blue, The Bernie Mac Show, Entourage, Raising Hope, The Soul Man, Hell’s Kitchen, Richie Rich, and Rake. Anderson produced, wrote, and acted in the hit ABC series Blackish for which he was nominated for a Primetime Emmy Award. He also appeared on late night shows like Iron Chef America, Jimmy Kimmel Live!, and The Gong Show.

Yo! Did you see that assist?! That was crazy! When I’m on set, I LOVE hiding and streaming basketball games with @DIRECTV! You can do it too, just don’t tell my crew that you heard about it from me! 😉 directv.com/sports-events #ad

Anderson also has a long list of movies to his credit. He livened up films like Romeo Must Die, Big Momma’s House, Me Myself & Irene, Exit Wounds, Barbershop, Kangaroo Jack, Scary Movie 3, Hustle & Flow, The Departed, Transformers, Grudge Match, and Small Town Crime. No wonder Anthony Anderson’s net worth is a healthy $18.0 million and counting! The diligent and positive actor’s wealth is sure to grow in the future. He will soon be lending his voice to the upcoming animated films The Star and Ferdinand which are both set to be released later this year.

Is Anthony Anderson married? He sure is! Anthony Anderson’s wife, Alvina Stewart, was his college sweetheart and has supported him throughout his ventures. Anthony Anderson’s family consists of his mother Doris, stepfather Sterling Bowman, half-brother Derrick Bowman, wife Alvina, and their two children, Kyra and Nathan. Anthony Anderson’s mother was a telephone operator and actress who instilled an appreciation of the arts in her son, which is one of the reasons why he gravitated towards acting. Having made a name for himself in both television and film, Anderson is looking to broaden his career by doing new things.