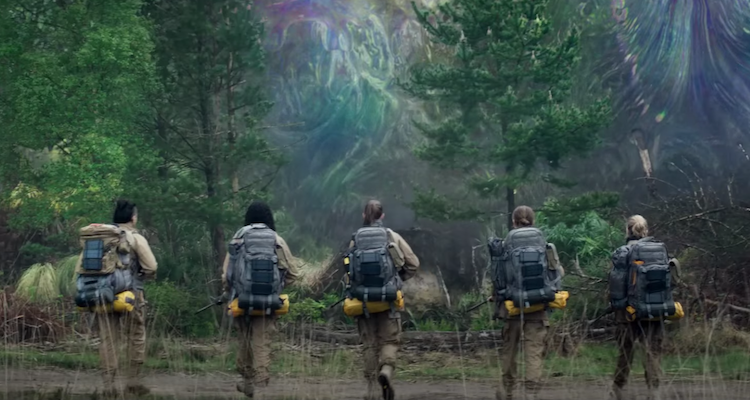 In a world where Marvel films have dominated post-credit scenes for a decade now, many have been wondering if this is the new normal. This has led some to ask about Natalie Portman’s Annihilation post-credits scene. Is there an Annihilation after-credits scene that fans should look out for?

“Almost none of us commit suicide. And almost all of us self-destruct,” Ventress (Leigh) tells biologist Lena (Portman) midway through the sci-fi thriller. The film is different from the novel in many ways, but the theme is still the same. The film follows Ventress and Lena, who are part of a five-person journey into Area X, a place that was once a national park but has since been turned into a danger zone.

It’s also surrounded by an unknown aura that is referred to as “The Shimmer.” Area X is known to produce “damaged goods,” much like Lena’s husband, Kane (Isaac) who returned from the mysterious place in a catatonic state. (If you don’t get an all-female Ghostbusters vibe at some point in this movie, then you weren’t paying attention).

For Leigh, Annihilation was exactly what she expected it to be when she got the script.

“It was, actually,” Leigh told Interview magazine. “I think also we had the benefit of having Alex’s images. He had a lookbook of what he imagined. Some things were real and some were paintings and thing like that. I had an idea of what it would be like, and it’s within that realm.”

Although Leigh’s character jumped into action with other scientists on a suicidal sci-fi mission, the 56-year-old actress said she wouldn’t volunteer.

“I’m sure I would be terrified,” she told Interview. “I would not volunteer to go in, number one [laughs]. That would not be me.

While the ending of most sci-fi thrillers can leave an Easter egg at the very end (after all the cast, crew, and everyone else involved in the flim has been listed), not all follow that possibility, including Annihilation. There are no post-credits scenes after the ending, even though the novel is part of a trilogy. Garland also mentioned earlier that he had no plans to create any sequels to the film adaptation, despite what fans might want to see later.

“I’ve got zero plans, I never did,” said Garland in a Coming Soon interview. “At the point I wrote the script, and we were way into the process of starting to make the movie, Jeff was still writing books two and three.”

He added, “I read book one in Galley form — it hadn’t been published yet — and so I did not think about those other two books and also I don’t mind the idea of other people working on franchises, I’ve got no judgment about it, it’s fine, but it’s not something I want to do.”