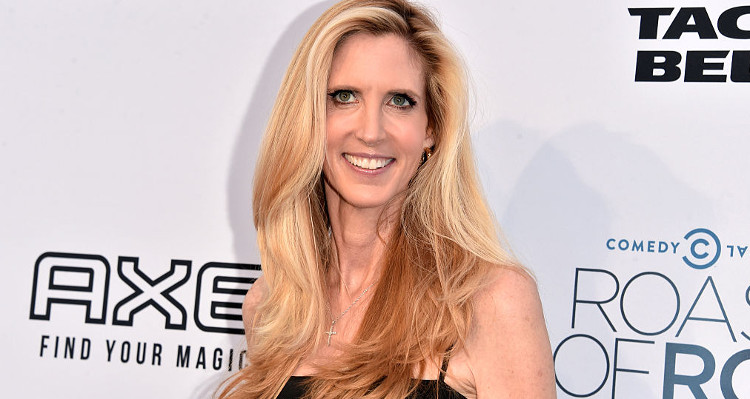 Conservative pundit Ann Coulter is a front line republican. Over the years, Coulter has garnered admiration as well as protests from the American populace. Recently, the outspoken conservative canceled her speech at UC Berkeley citing “security concerns.” Young America’s Foundation, the conservative group who had organized the engagement, have filed a suit against the university. For readers who want to know the commentator  beyond her political views and scathing speeches, here’s our Ann Coulter Wiki for you.

Ann Hart Coulter was born December 8, 1961, in New York City. Her father, John Vincent Coulter, was an FBI agent of Irish-German heritage and her mother, Nell Husbands Coulter, was a housewife. Both her parents were staunch Republicans. According to Coulter, she identified herself as a proponent of conservatism since her kindergarten days. To build her arguments, she would read books like Barry Goldwater’s Conscience of a Conservative.

The now 55-year-old Coulter was raised in New Canaan, Connecticut. Her conservative roots were further reinforced while studying history at Cornell University. As a student there, Coulter helped found The Cornell Review. She was also a member of the Delta Gamma national sorority.

After university, she embarked on a career as a law clerk in Kansas City, for Pasco Bowman II of the United States Court of Appeals for the Eighth Circuit. She specialized in corporate law in a private firm in New York before leaving to work for the United States Senate Judiciary Committee. She rose to prominence in the 1990s as an outspoken critic of the Clinton administration.

Ann Coulter’s career is highlighted by the publication of 12 books, and the weekly syndicated newspaper column that she publishes. A self-acclaimed polemicist, she describes herself as someone who doesn’t pretend to be impartial or balanced.

Coulter made her first national media appearance in 1996 after she was hired by the then-fledgling network MSNBC as a legal correspondent. She later appeared on CNN and Fox News.

Most of her 12 books have made it to the The New York Times Best Seller list.

Ann Coulter, a strong voice of the right-wing party, has also appeared on Comedy Central’s The Roast of Rob Lowe. Though the night was not about her, the other roasters had ample fun taking a dig at her.

Also Read: Cassini Wiki: What is the Cassini? Where is it Now?

The conservative columnist also makes numerous public appearances and speaks on television and radio talk shows, as well as on college campuses. Coulter typically spends 6 to 12 weeks of the year speaking engagement tours.

It is estimated  that Coulter charges $500,000 on the speaking circuit, for giving speeches on topics of modern conservatism, gay marriage, and what she describes as the hypocrisy of modern American liberalism. She has been heard supporting anti-abortion views in her speeches. From these appearances and speeches, Ann Coulter has a net worth of $8.5 million.

Conservative speaker, Ann Coulter is currently single. She has been in relationships with Andrew Stein (2007 – 2008), David Wheaton (2006) and Bob Guccione Jr. Coulter was recently linked to Good Times star Jimmie Walker, but has since denied the rumors.