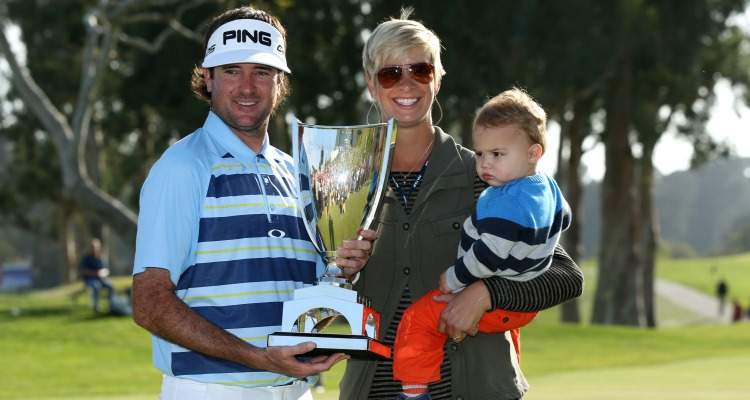 American pro golfer, Gerry “Bubba” Watson has gone two years without a victory but has made up for it by picking up two wins after the WGC Match Play on Sunday. Now, fans want to know more about his life away from the sport, which includes Bubba Watson’s wife. So read on for all the details!

The golf pro is getting more attention lately, and because of that, the focus is also being shifted to his family. After reading our Angie Watson wiki, you will have everything you need to know about Bubba Watson’s wife and kids.

Who Is Angie Watson?

Born on June 11, 1977, in Toronto, Ontario, Canada, Angie Watson’s age is 40. She graduated from the University of Georgia and was a pro basketball player.

In fact, Watson played with the WNBA’s Charlotte Sting. However, it was reported that she suffered a knee injury back in 2001.

According to the PGA Tour’s website, Bubba and Angie Watson met in 2001 at the University of Georgia. She decided to be upfront on their first date and told him that she couldn’t have children of her own.

Bubba Watson said that it would be “so cool to adopt, so cool to give a child a good home.”

Watson’s answer was perfect, and she thought that it said a lot about his character. They dated long distance for three years and eventually got married in 2004.

Bubba and Angie Watson’s kids are adopted. They have a son named Caleb Watson and a daughter named Dakota Watson.

We’re not surprised they’re not a shallow couple. Especially since Watson is a year younger and shorter than his wife (her height is a whopping 6’4″), but that certainly didn’t bother her!

She Put Her Husband’s Career First

When the couple was first starting out, they had to figure out how to juggle everything.

At the time, Bubba Watson was playing the Web.com Tour, and his wife played for the WNBA in the U.S. after playing in Italy and France. They eventually concluded that Watson’s golfing career took the spotlight instead of her basketball career.

“It’s just really, really hard to go there and play basketball for such little money,” Angie Watson said to PGA Tour. “And he’d be back here trying to reach his goals and then we’d be trying to meet somewhere in an airport to say hello for five minutes.”

The Watson’s eventually settled in Pensacola, Florida, near the pro golfer’s hometown of Bagdad.

We Have a Winner!

Bubba Watson has come a long way in his career. And just when he had thoughts of quitting completely, he surprises himself and wins!

In fact, according to his PGA Tour interview, Watson had to postpone his upcoming family vacation plans because he keeps winning his matches! His next potential victory is the Augusta National.

But more important than his winnings is Watson’s ability to help children in need. The man simply has a heart of gold.

Last September, Watson made a $1.6 million donation to The Studer Family Children’s Hospital at Sacred Heart back in Pensacola.

“Me donating money to the Children’s Hospital, that’s the biggest trophy I’ve ever been a part of,” Watson said. “When I’m no longer here, there’s going to be people being helped, kids being helped, families being helped. The Ronald McDonald house that’s attached to the hospital, we’ve been a part of that, seen some amazing stuff happen there.”

Watson added, “So when I look back at my career, it’s the stuff outside of golf. This check this week will help me do a lot of good throughout different communities.”

But it doesn’t stop there. Watson’s loving wife is also in on the charitable action!

Together in 2014, the couple formed the Bubba Watson Foundation to enhance their ability to help those in need. It has a particular emphasis on helping youth, children, and those associated with the U.S. Military.

When Bubba and Angie Watson aren’t being completely adorable together or doing what they can to help those in need, they’re spending time (on and off the course) with their beautiful kids! #couplesgoals.