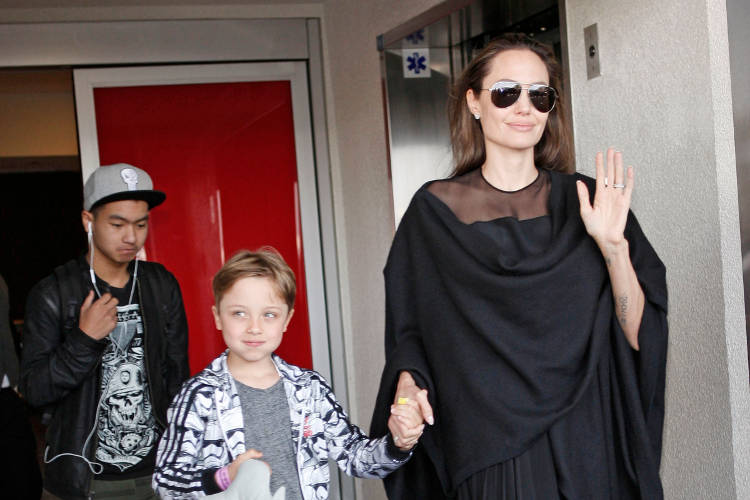 The news of Angelina Jolie’s suicide is spreading across Hollywood like wild fire. People are rubbing their eyes with disbelief and asking, “Did Angelina Jolie die?” There are unconfirmed reports that a video clip has surfaced, where Angelina Jolie says goodbye. Fans were in a daze as they tried to come to terms with the news report. But before you freak out, let us assure you that the report is not true. Angelina Jolie is not dead. The rumor of her committing suicide is not true. It’s a hoax! So, just put that handkerchief away, wipe your tears and we will reveal the facts behind this ugly rumor.

It all started when a little known website named Entertainment News Update put up this shocking story that Jolie had taken her own life. The report went on to claim that they had footage from CNN where she says ‘goodbye’ to her husband, Brad Pitt, and her six children. The headline on this report said, “This is really sad, nobody deserves to die by suicide! God will settle it all in the end, and only HE knew their heart!!” People who read it first were horrified by the report and they quickly told their friends. Soon, the news was spreading all over Hollywood. People all over the world know who Jolie is, and they too were bewildered by this news.

Thankfully, it was just somebody’s sick way creating a disruption. For some strange reason, someone targeted Jolie and created this sick rumor, and with news of the death of a celebrity this famous, the news spread very quickly. Rumors are always going to occur, especially on the Hollywood scene as people are always interested in the lives of the rich and famous. But you’ve got to remember to take them with a grain of salt! However, this one was a hit below the belt. Jolie is very popular and admired all over the world. She is a Hollywood A-lister who does humanitarian work to help people. So, why would someone target her?

How the Scam Works?

The Angelina Jolie suicide report is a scam, and we will tell you how it works. The suicide report began circulating by a scam site attempting to gain your personal information through Facebook. These fake stories are generated so that Facebook users will click on the link, thereby giving this website access to your Facebook account. The big hook is the fake video, which many people believe is real, and they end up giving their personal information to this website. By doing this, the website gains access to your personal information and also gets traffic to their site. A special app attaches itself to your account and takes away information that you would prefer to keep undisclosed. So, just a warning, don’t click it!

This kind of scam is becoming frequent these days on Facebook, as there have been other hoax news reports targeting celebrities like Rowan Atkinson and Jaden Smith. People are wondering why Facebook is allowing these scamsters to misuse their product. Why isn’t Facebook doing anything about it? We hope this has come to the attention of Facebook, so that they can take appropriate steps to stop this misuse. A rumor like this causes hurt and sadness among people which is cruel to do. The actors themselves and their families are the ones who suffer, as it’s very traumatic to endure the loss of a loved one, even if it’s all a hoax.

Why Jolie Must Eat Healthy?

The reason why people might have believed this rumor is that there have been reports in the media that Jolie is unwell and has a eating disorder. She has lost a lot of weight in the last three years and if you look at her recent photographs, you will see how thin and skeletal she looks, as compared to her weight three-four years ago. Reports say that Pitt is very concerned at this and has been telling Jolie to eat regularly so that she can be back to her usual healthy self. After all, Jolie is the one who brought the action figure Lara Croft to life on the big screen.

It Runs in the Family

Jolie is also vulnerable to breast cancer as both her mother and aunt have died of cancer, but Jolie has already taken precautions for this. In 2013 she underwent a preventive double mastectomy, which lowers the chances of getting afflicted by breast cancer to less than five percent. She has done a lot of developmental work in raising awareness about breast cancer as it affects many women in America and the rest of the world. By being open with her family history and her preventive steps, Jolie has inspired many women to fight this epidemic of breast cancer.

So, once again we confirm that Angelina Jolie is not dead. On the contrary, she is healthy and busy with her work! She is currently producing two films, one of which will release this year while the other one will release in 2017. Despite rumors that her marriage to Pitt is on the rocks, Jolie admits that they have their issues but nothing more than what most people go through. So, everyone can take a sigh of relief and relax; Jolie is alive and kicking!