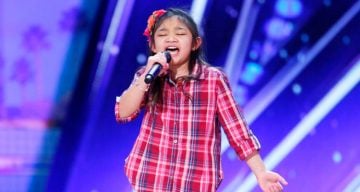 Angelica Hale, an adorable 9-year-old girl, took the AGT judges and audience by surprise with a powerful rendition of Andra Day’s “Rise Up.” Hale already melted the judges’ heart with her cute smile and adorable attitude, but when she roared a melodious tune, they were left marveled! Read our Angelica Hale wiki to learn everything about the young girl with the golden voice.

Angelica Hale was born on July 31, 2007 and is from Atlanta, Georgia. Hale is a bundle of talent, who not only sings, but has acted in the short film, Medieval Sockocalpyse (2016).

A survivor herself, the young singer is deeply passionate about non-profit organizations. She is performing all over North America to raise awareness and funds for Children’s Miracle Network Hospitals.

Angelica Hale is a rockstar, not only on the stage but in real life, as well. In 2012, when she was only four years old, Hale developed a fatal medical condition. She became very ill with a bacterial infection in her lungs that soon turned into double pneumonia, and she was fighting for life. Hale was put on ECMO life-support at Children’s Healthcare of Atlanta.

Her kidneys were severely damaged and, as a result, she had to undergo hemodialysis and later peritoneal dialysis for over a year. After struggling to survive, and a in need of a kidney transplant, it was discovered that her mother was a match. In September 2013, Eva Hale donated a kidney to her daughter, and the then-six-year-old got a new lease on life.

Now 9 years old, Angelica Hale has been interested in music for most of her life. She began singing as a two-year-old, and started performing at local competitions when she was five. Soon, her gifted voice garnered admiration. Before taking the America’s Got Talent stage, Hale already made a name for herself as a singer.

She even got the opportunity to sing the national anthem at the SunTrust Park stadium and perform on the show Wonderama. After sharing her inspiring story, the young girl with the contagious smile and spirit sang Whitney Houston’s “Greatest Love of All.” She also wowed the audience and teaching artists alike with her performance of “Let it Go” from Frozen, at the The Broadway Dreams Foundation: Take It To The Limit in 2014.

During her AGT audition, the Atlanta-native told the judges that she aspires to be the next Whitney Houston! She proved her superstar power as she held the audience with her soulful and compelling voice.

Angelica Hale is inspired by singers like Mariah Carey, Whitney Houston, and Alicia Keys. When asked what she loves most about music, Hale said, “Music makes you get the groove on!” The amazing part is that she understands the effect her voice has on listeners: it inspires her audience, something which is quite precocious for someone who’s only 9 years old!

This young girl is a rising star and deserves all the love and support from AGT fans. We wish her the best luck. Go get it, kid!