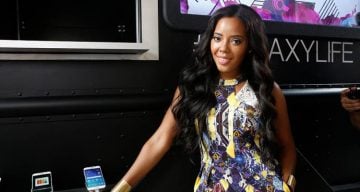 Coming from hip-hop royalty doesn’t protect you from baby daddy drama, but Angela Simmons is done with hers. She is setting the record on her relationship straight in season 4 of Growing Up Hip Hop.

Drama follows the cast of Growing Up Hip Hop everywhere, and Angela Simmons is no exception. Angela’s romantic troubles have hooked us on GUHH since her reality TV debut. However, outside the reality star persona, she’s an inspiring, self-made woman. Angela’s dad may be the Rev.

Run and she may be hip-hop royalty, but she’s making her star shine all by her own efforts.

Growing Up Hip Hop follows the lives of the kids of hip-hop’s greats,  who are all making their own path in the industry. Angela Simmons’ last name gives away her family’s identity as the creme-de-la-creme of hip-hop.

Her father, Joseph Simmons, is better known by his stage persona, Rev. Run of Run-DMC. Angela was born on September 18, 1987, in Queens, New York to Rev. Run and his first wife, Valerie Vaughn.

The 30-year-old has an older sister named Vanessa and a younger brother, Joseph Simmons Jr. They also have half-siblings, Daniel “Diggy” Simmons III, Russell “Russy” Simmons II, and Victoria Anne Simmons, but sadly, Victoria passed away shortly after she was born. Rev. Run and his wife, Justine Jones also adopted a girl they named Miley Simmons.

Fashion Is Her Calling

Angela appeared in Bow Wow’s music video for “Shortie like Mine,” but that was the closest she came to a music career. Instead of music and ministry, Angela Simmons set her sights on the fashion industry.

She graduated from the High School of Fashion Industries and went on to attend the Fashion Institute of Technology in Manhattan, New York. But she dropped out after a year to jumpstart her career.

Angela’s was the editor of the “Angela’s Rundown,” a sub-publication of the teen magazine, Word Up. She covered teen troubles, music, and style, offered fashion tips, and interviewed celebrities. But the magazine, along with her section, went defunct in 2012.

But that far from dented her career.

Together with her sister Vanessa, Angela launched the shoe collection called Pastry, in 2007. Vanessa and Angela had been toying with the idea of a feminine sporty footwear line for a while, which led to the creation of their signature sneakers for women.

They expanded to clothing and handbags in addition to shoes a year after the launch. And wouldn’t you know it, the line saw huge success! The sisters reportedly earned a whopping $15.0 million in the first year of Pastry’s launch.

With experience from designing for and running Pastry, Angela made her solo venture in 2015 with Foofi & Bella, a faux fur line. Together with track and field Olympian, Sanya Richards-Ross, Foofi & Bella provides a cruelty-free “chic alternative to fur.”

She also designs her own pieces for Shoptiques.com and eventually opened her own boutique.

“It’s important to promote entrepreneurship and all the things that young adults can do because dreams can come true. It’s important to be business-minded from a young age,” Angela believes. For this reason, she launched the lifestyle brand, ANGELA I AM, to encourage young talent in the fashion business.

She also strives to bring about a fitness movement with her Built NOT Bought workout regime. Her businesses and multiple reality shows have earned Angela a pretty penny and she’s not slowing down!

Angela’s ambition was to blaze a path of her own in the fashion industry. And thanks to successfully achieving that, she has already earned an estimated net worth of $7.5 million.

We’ve seen Angela hustle up recognition for business on reality TV, but we’ve seen her go through ups and downs in her personal life, too. She was once in a relationship with Bow Wow. They had been close before that, but after they broke up, they drifted apart.

When Angela and Bow Wow caught up in GUHH, the rapper said that their relationship didn’t progress because of their differing opinions on sex before marriage.

It also came as quite a shock to Bow Wow that rumors were swirling that Angela had gotten engaged! During their conversation, Bow Wow attempted to get to the bottom of Angela’s engagement rumors. That’s when she revealed that she got pregnant and had a kid, much to his surprise.

YES!! I couldn’t be more excited. This is only something I could of only dreamed of. I’m over the moon and feeling so blessed to be able to share my life with the one I truly love. Everything happened in the most perfect way. ????❤️❤️

At that time, Angela was dating Sutton Tennyson, but she didn’t disclose his identity until much later. There were even rumors that the alleged boyfriend was Yo Gotti. She announced she was engaged through Instagram in 2016, and a few weeks later, revealed she was expecting her first child with her mystery man! It was a lot of tea to handle at once and fans were all over it!

Her son, Sutton Joseph Tennyson Jr., was born in 2016 and his parents’ relationship was going smoothly too. That is, until sometime in 2017, when fans noticed that Angela wasn’t posting much about her fiancee. She was even spotted a few times without her engagement ring.

After much speculation, Angela revealed through an Instagram post that she’d be starting 2018 as a single mom!

Tennyson reportedly has a criminal history involving drug possession and police obstruction charges. He even spent time in prison for carrying a gun. In addition to felony charges, he was also hit with expensive lawsuits.

Angela’s engagement with the felon reportedly ended when evidence that he cheated on her surfaced. She explained that she would be “walking away from what isn’t healthy” and in a length IG post, explained that she must do what’s best for her in order to be happy. Her post, a call to all women, received over 75K likes, with endless support from her fans in the comments section!

Before the Kardashians, for a while, it seemed that the Simmons were the “first family” of reality TV. Angela made her reality TV debut in 2005 with the rest of the Simmons’ brood in Run’s House. It spawned the spin-off show, Daddy’s Girls, starring Angela and Vanessa.

She returned to reality TV in 2016 with fellow famous scions in Growing Up Hip-Hop. Season 4 recently started and we’re already knee-deep into Angela’s relationship issues since breaking up with her fiance!

Angela started season 4 by setting the record straight – Sutton Tennyson is out of her life for good. At this point, the only love of her life is her adorable son.

But that’s not to say she doesn’t have room for another relationship. Angela is close to her castmate, Romeo Miller and the two have an understated connection with some flirtatious moments on occasion.

Romeo has never made his affection for Angela a secret. Avid fans of the show might remember that Romeo was taken aback by Angela’s engagement announcement through Instagram.

With Vanessa playing cupid, our favorite GUHH stars might grow beyond friendship. Who here is rooting for Angela and Romeo? We sure are!