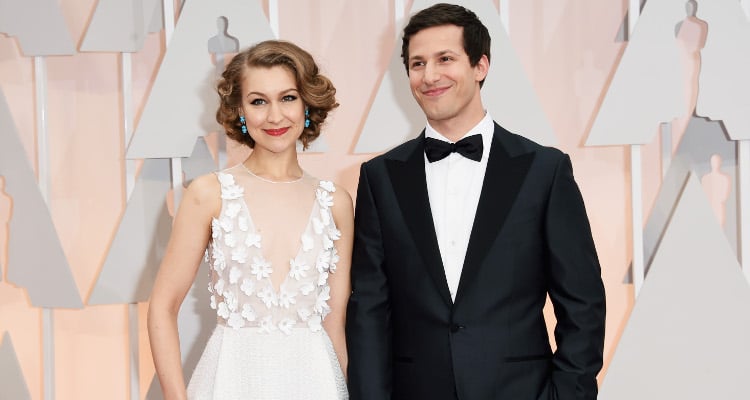 Andy Samberg and his wife, Joanna Newsom welcomed their first child together. Now that’s big, especially considering we didn’t even know that Newsom was pregnant in the first place! If you don’t know who Andy Samberg’s wife is, Joanna Newsom is a talented musician with a net worth of $5.0 million. Read more about her, right here!

Andy Samberg’s secret is out! The funnyman and his wife, Joanna Newsom kept her pregnancy under wraps for a while, but now, Andy Samberg and Joanna Newsom are new parents to a baby girl! It’s not yet known when the latest addition to the Samberg brood arrived, or what her name is. The couple is certainly skilled in the art of privacy! Get the lowdown on Andy Samberg’s wife in our Joanna Newsom wiki.

Joanna Newsom’s parents were doctors, whom she described as “progressive-minded professionals.” They moved from San Francisco and raised Joanna, her elder brother, and younger sister in California’s Nevada County. Afraid of the bad influence it might have on their children, the Newsoms didn’t let their kids watch TV or listen to the radio.

Instead, her parents encouraged her talent in music. Her father, an oncologist, played the guitar and her mother played the piano, among other instruments. At the age of four, Joanna loved the harp and begged her parents for lessons, which she got a few years later. Her instructor did not want to teach such a young child, so he encouraged her to learn piano before the harp.

She soon graduated from Celtic harps to a full-size pedal harp, and made sure to carry it everywhere. “I haven’t had a car since I was 16 that couldn’t fit a harp,” she said about her Audi SUV that barely accommodates her harp. She studied theater at Waldorf and went to Mills College, but dropped out to pursue music.

When Newsom was studying composition at Mills while working at a clothing store, she began preparing two debut EPs, Walnut Whales and Yarn and Glue. She recorded her tracks on a home computer and burned several copies to swap among her friends and give out at her early shows.

One of her friends gave an early copy of her EP to Will Oldham, a singer-songwriter and actor. Oldham was so impressed by Newsom’s talent, he contacted her immediately and asked her to join his tour! He also gave a copy of her EP to the owner of Drag City records where he was signed. Equally enchanted, the record label signed her right away and they released her debut album, The Milk-Eyed Wonder in 2004.

She has since released three albums, her last one Divers in 2015. Since she hasn’t been active in the last couple years, there are no latest estimates of her wealth. As of 2015, Joanna Newsom was estimated to be worth $5.0 million. The 35-year-old’s husband, Andy Samberg, has a net worth of $16.0 million.

Before they even dated, Andy Sandberg was a fan of the harpist. The SNL alum would go to her shows and had a crush on Newsom. Lucky for Sandberg, they had mutual friends who were more than happy to set them up! As it turns out, Newsom was also a fan of the Brooklyn Nine-Nine star’s comedic music.

Sandberg collaborates with Jorma Taccone and Akiva Schaffer to form The Lonely Island. The trio records quirky raps with hilarious lyrics and stylish music videos like “I’m on a Boat” featuring T.I. and “Jack Sparrow” featuring Michael Bolton. It’s a far cry from Newsom’s indie folk music, but the two still hit it off! (Maybe he won her over with fan favorite, “D*ck in a Box!”) After five years of dating, the couple tied the knot in 2013.

Newsom and Sandberg married in September 2013 at a ranch in Big Sur, California. Their wedding was a grand affair as Newsom collaborated with Zac Posen to design a divine wedding dress, and Sandberg wore a custom David Hart suit.

The guest list included some big names in comedy, including Adam Sandler, Amy Poehler and her then-boyfriend Nick Kroll, Maya Thomas and her husband Paul Thomas Anderson, and SNL creator Lorne Michaels. Seth Meyers was among Sandberg’s groomsmen. With so many comedians among the attendees, it was reported that the guests were entertained by stand-up acts during the reception.

The couple lives in a Moorcrest estate in L.A., which was once home to Charlie Chaplin and Mary Astor. They also own a home in Manhattan, New York.

On August 8, 2017, a rep for Samberg confirmed that they welcomed their first child, a daughter. Newsom’s pregnancy was not revealed, though a year ago, Samberg did say that he was looking forward to having kids. Neither the date of their daughter’s birth nor her name has been disclosed.

Congrats to the new parents!