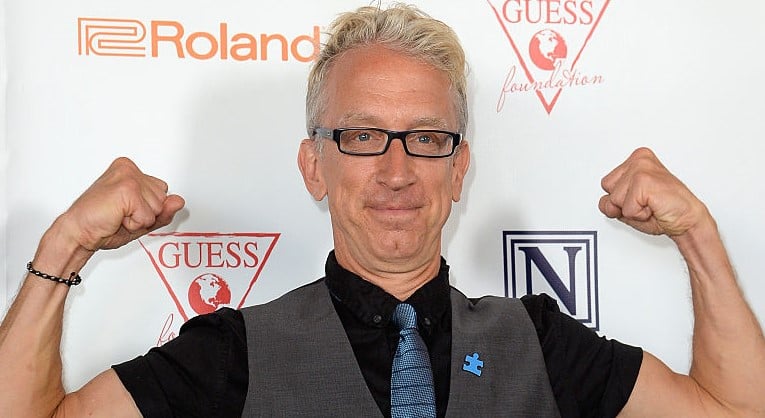 Who is Andy Dick?

Andrew Roane Dick, 51, was born on December 21, 1965, in Charleston, South Carolina. Andy Dick’s movies are mostly from the ’90s and some from the early 2000s, including roles in Matthew Broderick’s Inspector Gadget, Road Trip, The Lion King II, and Hoodwinked. He’s best known for his role on TV shows like The Andy Dick Show and Less than Perfect. Andy Dick’s net worth in 2017 is reported at $3.0 million.

Andy is bisexual and his partner is Lena Sved, with whom he has a son and a daughter. He was also previously married to Ivone Kowalczyk from 1986 to 1990 and they had a son in 1988, named Lucas. Andy has also experienced trouble with the law, alcohol, and drug abuse in the past but has been sober for years.

This producer is as talented as she is sexy! Read her New York Times bestseller JOURNEY TO RAINBOW ISLAND. Soon to be a movie. Guess who might be in it 😉 Glad I got to know you and your crew @christie_1027 ❤️

At the rate Hollywood is going, there will be no one left to work with! While some comedians find the recent allegations as a source for new material, many both in and out of the industry are saddened and surprised by some of the names mentioned lately. Andy Dick is now the latest actor to be outed as an alleged sexual predator and was accused of “groping people’s genitals, unwanted kissing/licking, and sexual propositions of at least four members of the production,” according to The Hollywood Reporter.

“I don’t grope people anymore. I don’t expose myself anymore,” Dick told The Hollywood Reporter by telephone. “I do understand that the temperature in the world right now is delicate.”

“I didn’t grope anybody. I might have kissed somebody on the cheek to say goodbye and then licked them. That’s my thing,” he continued. “It’s me being funny. I’m not trying to sexually harass people.”

While Dick denied the groping, he did admit to the propositioning and licking claims.

“Of course I’m going to proposition people,” he said. “I’m single, depressed, lonely and trying to get a date. They can just say no, and they probably did and then I was done.”

As a result of the allegations, the actor has been fired from his latest project, Raising Buchanan, an independent feature film.

According to The Hollywood Reporter the movie synopsis reads: “Written and directed by Bruce Dellis, Raising Buchanan stars Rene Auberjonois, Amanda Melby, Shannon Whirry and M. Emmet Walsh in the story of a woman who steals the corpse of former U.S. President James Buchanan (Auberjonois) hoping to land a ransom, but it seems that nobody is interested in getting the body back.”