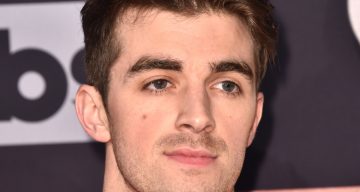 Since the release of their song “Closer” featuring Halsey, The Chainsmokers have caught people’s attention early in 2017. Especially Andrew Taggart, who has people wondering about his love life. Find out who Andrew Taggart’s girlfriend is and learn all you need to know about her, right here.

It can be hard for celebrities to keep their private life away from the paparazzi and media. However, sometimes celebrities slip up and make fans question the star’s relationships. The same thing happened with The Chainsmokers DJ Andrew Taggart, whose latest stunt with singer Halsey during the MTV VMAs has made everybody question who his girlfriend is. Their performance was so steamy that it had the rumor mill working overtime, but is Halsey really Andrew Taggart’s girlfriend?

Who is Andrew Taggart Dating?

Andrew Taggart and Halsey originally sparked dating rumors at the MTV VMAs, last November. Considering The Chainsmokers and Halsey have a hit song together, it’s no surprise that the DJ duo paid a surprise visit during Halsey’s Madison Square Garden show, during her Badlands tour before the VMAs. But their steamy performance made viewers question how close the two really were.

Taggart and Halsey had so much chemistry on stage, that it sparked rumors that the two were dating. In fact, during an interview with Billboard, both Taggart and his band mate, Alex Pall disclosed that they were both in serious relationships. According to sources, Taggart’s steamy performance with Halsey might be the reason behind the rift between him and his longtime girlfriend. Pall spoke about Taggart’s breakup during a radio interview with Australia’s 96.1 The Edge’s morning show with Mike & Emma saying, “Actually I still have the same girlfriend but Drew just broke up with his girlfriend like two days ago.” He further added, “I know his girlfriend, I know her really well and I know he really loves her but I think its just a matter of, things are so hectic right now and sometimes you just feel bad about… I think he feels really guilty about the fact that we’re always away and we’re doing crazy things and like there’s certain opportunities and situations that will be coming up that are going to put a strain on is relationship and I think he wanted to free guilt free in the stuff he was doing.”

Despite the split from his lady, it now looks like Andrew Taggart’s girlfriend is Halsey. Though there isn’t much evidence of the two together on Halsey’s Instagram account, the chemistry between them is undeniable. If the rumors are true, we’re all for this couple collaborating emotionally, as well as musically!