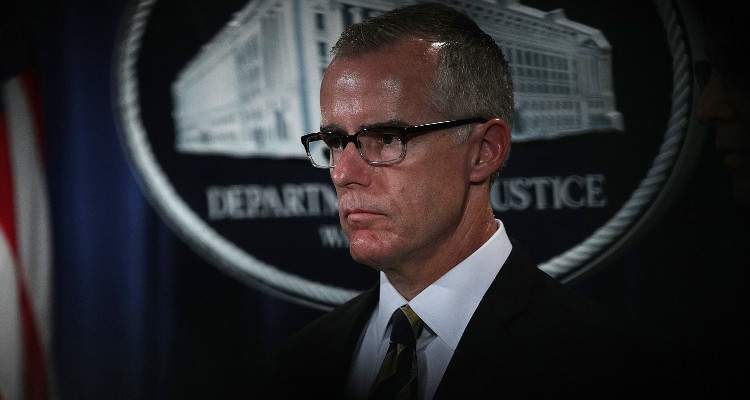 After months of pressure and scathing attacks from President Trump, FBI Deputy Director Andrew McCabe abruptly stepped down from his post. McCabe had been the target of Trump’s ire for a long time. The president once reportedly taunted his wife, Jill McCabe’s failed political career. With McCabe’s resignation, his wife’s name is floating around again. What is the buzz surrounding Andrew McCabe’s wife? Find out all about in Jill McCabe’s wiki.

Dr. Jill McCabe is a pediatrician from Loudoun County in Virginia, where she lives with her husband and their two children. She has no political experience whatsoever. But it didn’t stop her from running for Virginia State Senate in 2015.

She was the Democratic candidate in the 2015 election. During the campaign, her opponent, Richard Black courted controversy for targeting her lack of political experience. Nevertheless, Black won over McCabe and that was the end of her political career.

McCabe dreamed of becoming a doctor since she was five years old. She worked as a pediatrician for more than a decade.

Among her many duties in the medical services, she served as the medical director of the Pediatric Emergency Department, the Pediatric Hospitalist Services, and the Outpatient Concussion Program at Inova Loudoun Hospital. Among her campaign causes, she advocated measures to improve safety, health, and education laws for kids.

Found this lost dog while canvassing so stopped to call dog's owner and return the pup. #solvingproblems in #SD13 pic.twitter.com/vVH2XuCq2y

She Received Donations for Her Campaign

While running for state senate, then Virginia Governor, Terry McAuliffe’s political action committee donated $467,500 to her campaign. During the 2015 election, Andrew McCabe was working in the FBI in an unrelated capacity. There’s no rule preventing the spouse of an FBI employee from accepting campaign donations.

So why is the GOP so concerned about the losing candidate’s campaign? Here’s the math: Andrew McCabe was promoted to FBI Deputy Director long after Jill’s senate run ended. At that time, the FBI was looking into then Democratic presidential candidate, Hillary Clinton’s email scandal.

My husband Andrew and I voted, did you? One hour until the polls close in Virginia. #GoVote pic.twitter.com/rxxb8oqWRL

McAuliffe is a longtime friend of the Clintons and Hillary Clinton’s ally. The FBI decided not to file criminal charges against her. Consequently, his donation to McCabe’s campaign was suspected as quid pro quo.

Senator Richard Black commented on the matter saying,“I am at a loss to see how the FBI could possibly allow Andrew McCabe to oversee the investigation of Mrs. Clinton’s email server scandals. Mr. McCabe was clearly indebted to the Clinton Campaign because of the support given his wife.”

But the accusations against the McCabes were misplaced. McAuliffe is a known financial backer of Democratic candidates who have a better chance at winning the Senate. He previously funded the campaign of an attorney who represented a Bill Clinton accuser.

Thank you to everyone in #SD13 who votes @DrJillMcCabe today! B. Jill McCabe for State Senator! pic.twitter.com/XsY1t2NjuO

What Did Trump Say about Jill McCabe?

For a long time, Andrew McCabe was the target of President Trump’s aggressive criticism. He temporarily replaced James Comey as FBI Director until Christopher Wray was appointed. McCabe was a Comey appointee, so it was clear that the president distrusted him.

The tension between McCabe and the president was obvious. According to one account, then deputy director McCabe got a call from Trump the day after Comey was fired. The president was reportedly furious that Comey took a government-funded plane from L.A. to Washington D.C. after he was fired.

Comey would later reveal that he learned of his firing from the TV. McCabe told the commander-in-chief that he wasn’t asked to authorize a flight and if someone did, he would have approved it. That reportedly didn’t sit well with Trump.

Sources who know of the phone call said that Trump went silent after McCabe’s response. The silence was broken when Trump reportedly told McCabe to ask his wife how it feels to be a loser. It was a reference to her failed senate run.

Trump has made references to McAuliffe’s donations to Jill McCabe’s campaign in tweets, and while campaigning in Florida during the presidential race.

How can FBI Deputy Director Andrew McCabe, the man in charge, along with leakin’ James Comey, of the Phony Hillary Clinton investigation (including her 33,000 illegally deleted emails) be given $700,000 for wife’s campaign by Clinton Puppets during investigation?