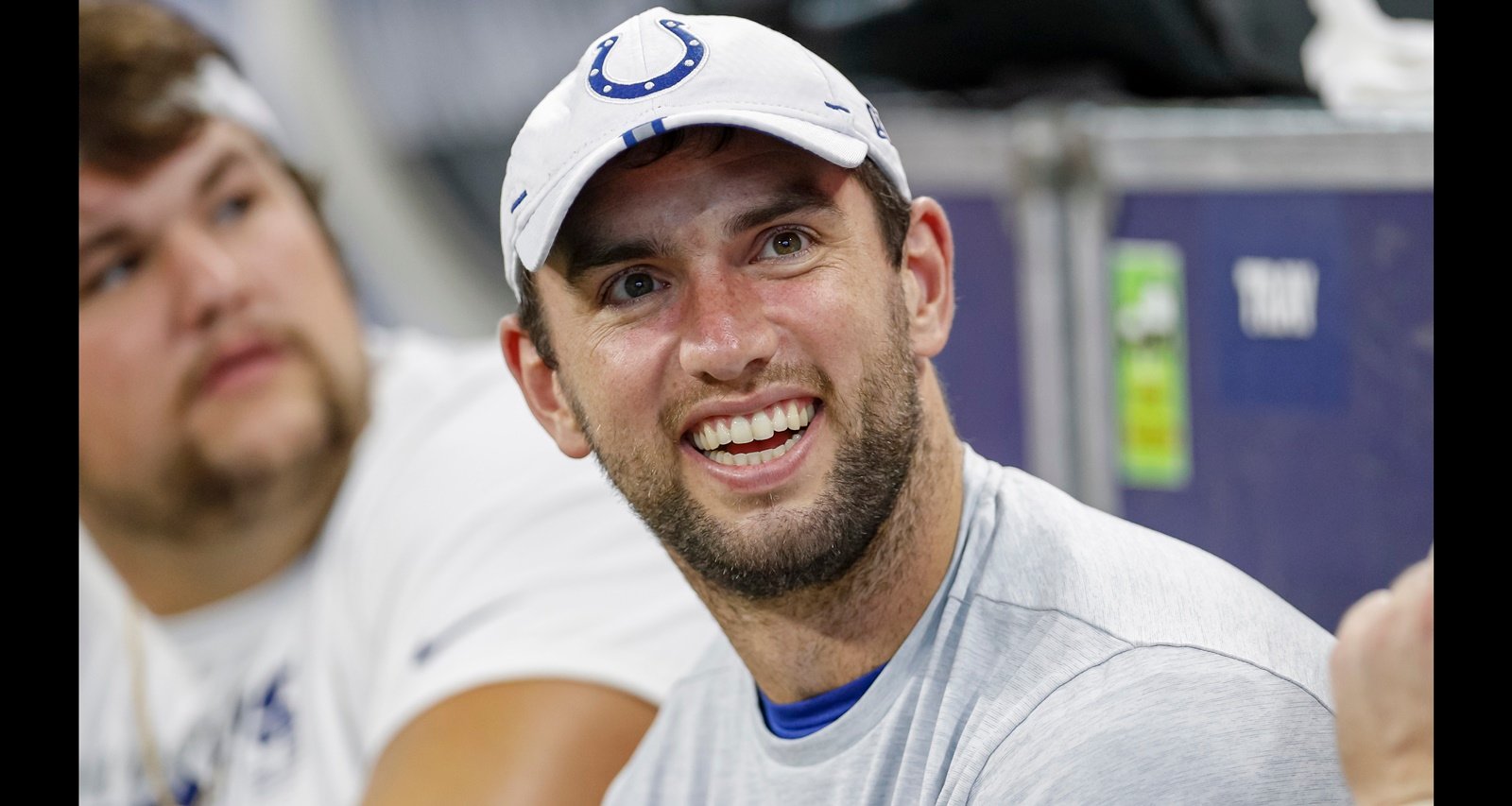 Quarterback Andrew Luck #12 of the Indianapolis Colts is seen in the bench area during the game against the Cleveland Browns at Lucas Oil Stadium on August 17, 2019 in Indianapolis, Indiana. (Photo by Michael Hickey/Getty Images)

Indianapolis Colts quarterback Andrew Luck announced his retirement from the NFL Saturday (August 24), shocking scores of fans. Though one of the top players in the league and projected to have a great career if he continued, Luck decided to retire after only seven years in the sport due to a mounting spate of injuries. His intense focus on the game earned him an estimated net worth of $26.9 million in 2019. He is retiring wealthy, but following his retirement announcement, it was revealed that Luck could have earned a lot more if he continued his current contract. We’ve explained the details of the quarterback’s contract in Andrew Luck’s net worth.

Andrew Luck Was a No. 1 Draft Prospect

Andrew Luck, born on September 12, 1989, is the son of Oliver Luck, who was a former NFL quarterback-turned-athletic director at West Virginia University. Oliver used to work for the NCAA and is now the commissioner of Vince McMahon’s XFL.

Andrew graduated from Stratford High School in Houston, Texas in 2008 as a co-valedictorian and star football player. Among the top D1 offers on the table, he opted to study architecture at Stanford on an athletic scholarship.

At Stanford, Luck built amazing stats, earned several honors, and set major records in the school’s history. By his sophomore year, he was already seen as a top draft prospect in the country, comparable to Peyton Manning.

Fans across the country were encouraging their favorite teams to increase their chances of picking Luck. As it turned out, the Indianapolis Colts got the Luck-y and selected Andrew as the first overall pick of the 2012 NFL Draft.

Luck Played for the Colts His Entire Career

In 2012, Luck signed a four-year contract worth $22.0 million with the Colts. In the following seasons, the franchise knew he was too good a quarterback to lose, and picked up the fifth-year option on his contract in 2015 to keep him on their roster. That deal guaranteed him $16.5 million in 2016.

In 2016, Luck signed a contract extension worth a whopping $140.0 million, with a guaranteed $87.0 million. That deal made him the highest-paid footballer in the NFL that year and would keep through the 2021 season. It also ranks him among Forbes’ highest paid athletes in the world.

Luck Would Have Earned over $60.0 Million through His Contract

Professional football had taken a mental and physical toll on Andrew Luck’s body, leading to him retire at the age of 29. By most estimates, he’s too young to retire and had a great career ahead of him. However, he has chosen his well-being over football glory.

The contract he signed in 2016 spanned five years, but he decided to forego his earnings for the 2019 to 2021 seasons. According to a Spotrac analyst’s tweet, Luck would have earned $64.0 million in three years if he continued.

With his retirement, now the Colts will have a $24.8-million dead cap hit. Colts owner Jim Irsay claims that a talented quarterback like Luck would have earned $500.0 million in his career. Irsay, and Colts nation, is clearly hoping this isn’t the end for Luck.

Luck hasn’t revealed what he plans to do after retirement. He might get a job in the broadcast booth. But many are still hoping he could return to the gridiron as a player.

NFL quarterbacks are bankable on and off the gridiron. A talented player like Andrew Luck is even more so.

It’s estimated that Luck earned over $50.0 million from his endorsement deals and merchandise sales alone. His endorsement earnings in 2019 were a hefty $2.8 million.

During his career, Luck signed endorsement contracts with Nike, DIRECTV, Panini, Gatorade, EA Sports, and Klipsch. His Gatorade ad, where he shakes a leg, is perhaps his most famous.

But he surprised everyone with his business savvy in 2013 when he parted ways with Gatorade to sign with BodyArmor for an equity stake in the company. Then an upstart sports-drink company, BodyArmor got the quarterback on board not only as an endorser, but also as a partner and investor.

That same year, he signed a multi-year deal with Klipsch. An avid classic rock fan, Luck endorsing the company’s Pro-Sport Headphones was a marriage made in heaven.