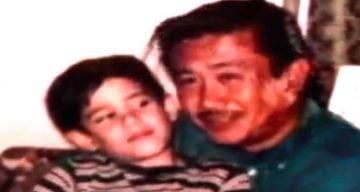 Last night on The Assassination of Gianni Versace: American Crime Story, Andrew Cunanan’s father, Modesto Cunanan, was introduced. Viewers got to see further into the life of the serial killer. Keep reading to know more about the man who might be responsible for his son’s behavior with details from Modesto Cunanan’s wiki.

Andrew Cunanan had the similar thought processes as his father when it came to proving something. Modesto “Pete” Cunanan was also very passionate about making it big in the United States, and the latest episode of The Assassination of Gianni Versace: American Crime Story showcases the story behind that thought.

The show’s front-runners, Ryan Murphy and Matt Bomer, take their viewers through what it was like living with and dreading Modesto Cunanan. It helps to shed light on Andrew Cunanan’s behavior and character further.

Modesto Cunanan was a hard-working man who wanted to live the “American Dream.” He served in the U.S. Navy at the time of Andrew’s birth, which was simultaneous to the Vietnam War.

Cunanan loved his son. So much so, that after Andrew Cunanan’s death, he told people that he refused to believe the American police and the fact that his son was gay or a male prostitute.

It all began when Andrew Cunanan was a child and showed great intelligence. Modesto Cunanan was starry-eyed to his son’s smartness and believed that it could lead to something big someday.

Cunanan’s wife, Mary Ann Schillaci, who was an Italian-American, also firmly believed that the love she is giving her son is going to pan out for the best.

Modesto Cunanan spoiled his son with his love and made him the center of his world. He ignored the rest of his children and even his wife.

When the family moved into a bigger home, Andrew Cunanan was shown the master bedroom before even his mother could get a glimpse of it. Why was there an extra connection? Was Andrew Cunanan molested by his father?

Unfortunately, there was no evidence to prove that.

But Modesto Cunanan was fierce in his love for sure. He failed to provide a nurturing environment to his children by abusing their mother regularly.

Cunanan even went to the extent of accusing Schillaci of infidelity. He was convinced that his their first-born, daughter Elena, was not his.

But Cunanan made sure he behaved better with Andrew, who was his youngest and smartest. His IQ was calculated at 147, and his parents were thrilled that their son was probably the next big thing.

Cunanan’s brother, Christopher, told ABC that Andrew was given every comfort the others were denied.

Andrew Cunanan’s sister, Elena, also said that her father preferred him over the others all the time and said in an interview, “My dad gave him a sports car. He had the master bedroom. He had his own bath and everything.”

But Andrew was far from the expectations of his parents. Sure he was very clever, intelligent, and witty, but he used all these attributes for all the wrong reasons.

Some studies say that looking at Cunanan’s father’s love-hate behavior towards his family could have led his son to hole-up in his room and pretend to be many things he wasn’t.

Also Read: Who Was Andrew Cunanans’ Mother Mary Ann Who Suffered Abuse From Her Husband?

As the TV show suggests, Andrew Cunanan grew up in mercurial situations at home, and he made up for it outside of it. He began creating fantasies about various things in his life.

As a teenager, Cunanan began lying about his home and family by making up unreal but beautifully woven stories. Soon his reputation became that of a copious liar.

When Cunanan was 19, his father, who was working with a big financial firm as a stockbroker (on the TV show he is shown to be an employee with Merrill-Lynch), fled America to go back to his town in the Philippines.

Modesto Cunanan was caught in an embezzlement case. And to avoid arrest, he fled and left his entire family behind with nothing.

Andrew Cunanan was already up to no good in his life at that point. But seeing his father flee cemented the demons in his mind.

American Crime Story writer Tom Rob Smith said, “[Pete] committed what looked to be fraudulent trading activity. He moved down through various trading houses—smaller and smaller ones until he was finally caught. He had all of this fraud that was just circling him, and finally he runs to Manila.”

Modesto Cunanan settled in his hometown without ever looking back even once to the family he left behind in the United States. He re-married there and forgot about Mary Ann Schillaci and his children.

It was reported that Andrew Cunanan briefly lived with his father in the Philippines. However, he quickly went back to the states after being critical of the poverty his father was living in.

Could it be possible, that after seeing his father, who gave him everything and now had nothing, led to Andrew Cunanan to seek rich men?

We can never know the actual reason behind Andrew Cunanan’s associations and murders, as he killed himself days after his last victim, Gianni Versace, was found dead.