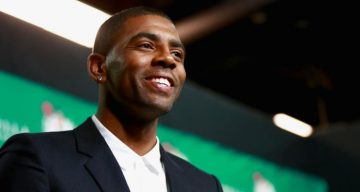 Things are being shaken up in sports lately and not only is MLB outfielder Justin Upton switching teams but so is basketball star Kyrie Irving! Now, fans want to know more about the trade and the man surrounding it, which includes digging into his personal life and Kyrie Irving’s “baby mama.” If you want to know about Kyrie Irving’s daughter and the woman who is the mother of his child, then take a look at our Andrea Wilson wiki.

Who is Andrea Wilson?

Andrea Wilson’s age is unknown and she is still Kyrie Irving’s ex-girlfriend. Her name has been mentioned in the news many times, thanks to her past relationship to Kyrie and the headlines aren’t all positive. Wilson is from Texas originally and was a Texas beauty queen. But don’t go looking for any of her personal photos, Andrea Wilson’s Instagram is set to private at the moment!

Although Kyrie and Wilson don’t agree on much, they both love their daughter more than anything. Many still remember his touching Instagram post, devoted to his daughter.

“Azurie Elizabeth Irving, 35 hours of labor from her great mother and she came into the world to bring a shine to my world that I never thought was possible,” Irving wrote. “I love you so much, and my heart grew the first time I felt your heart against mine. Mommy, I gave her your name because I know you will bless her and our family the same way you blessed me. I love you.”

Wilson and Kyrie had a tough custody battle but eventually came to a settlement. He pays Azurie’s private schooling and Wilson receives $4,500 in child support.

Appreciate my pops sending me this on this beautiful Sunday. Such a proud dad!! My little shorty is taking steps now ??

Say it ain’t so! Kyrie is leaving the Cleveland Cavaliers and heading to the Boston Celtics! His reason for leaving was motivated by his need to accomplish more in his career and see what else is out there.

“I haven’t spoken to [LeBron James], and my intent [in asking for a trade], like I said, was for my best intentions,” Irving continued. “To look back at the amount of ground we covered in the last three-year span … to really realize how special that was and how much stuff happened in that amount of time, I’d be sitting up here and telling you guys a lie if I didn’t tell you I learned so much from that guy.”

He explained that perfecting the craft comes in different ways and is still figuring out what it takes to be one of the greats.  “What does it take to be great?’ I’ve had the unique opportunity to play with one of the greats and it was awesome. … When you look back and you’re eternally grateful for the moments that you’ve had and shared; you’re able to put peace with that journey and start anew,” he said. Wise words from a young soul!

Looks like Kyrie is packing his bags once again and the Celtics just earned a few more fans to their side! Hopefully, Irving and ex Andrea Wilson will continue to put first what’s most important to them; their beautiful baby girl!

"My special thank you to Cleveland" *Link in Bio. My love extends way beyond the court I have for Cleveland and it will always be a place thats special because of the great people and experiences. The Ups and downs, we stand and fight no matter what the circumstances are, and that's what being in Cleveland embodies, it is all Love and a whole lotta pride. To the incredible individuals I've met who support the Cleveland organization and help allow us as Players to feel a special bond to the State/City and shared countless moments with, keep being YOU and know that my appreciation is eternal. Thank you From my whole being for being there as I was a 19 year old kid coming into the league, to now where I start another step in the journey as a 25 year old Evolving man. It will Always be Love and respect Cleveland. "The journey is always the Reward" #KyrieWick