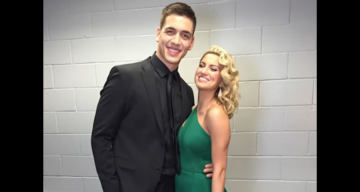 Last month, Grammy-nominated artist Tori Kelly dropped her new song, “Never Alone,” from her forthcoming album, Hiding Place. Now, she has announced an upcoming North American tour in support of her new project. Oh, and she’s doing pretty great on the personal front, too! The singer tied the knot in May 2018 with her basketball player beau André Murillo, announcing the big news on Instagram. Our André Murillo wiki has all the deets on the lucky guy who gets to call himself Tori Kelly’s husband!

Born on May 18, 1990, André Murillo is 28 years old. He and his sister, Michelle, were raised by their parents, Michael and Vera Murillo in Lake Forest, California.

Murillo has been a star basketball player throughout his life and excelled in the sport as a student. He graduated from El Toro High School in 2008, where he prepped for two varsity seasons and was named both team and Sea View League MVP. He also played football in high school.

He then attended Concordia University and played for the 2008-2009 season. He later transferred to Biola University, where he majored in Biblical studies and was named NAIA All-American.

In 2014, Murillo signed a contract to play with the Hamburg Towers in the German Pro A league weeks before he graduated from Biola. Not only was it a great career opportunity for him, but it also gave him a chance to be with his extended family.

Murillo is of German descent. His grandparents, uncles, and aunts live close to Hamburg where he played.

In addition to his basketball skills, his German ancestry was also another reason the Hamburg Towers were excited to have him on the team. But after a few seasons, Murillo then signed with the Rostock Seawolves.

He blogged about his time in Germany regularly. In one post, he mentioned that his then-girlfriend, who he didn’t idenify, visited him in Germany with his mother and sister.

• This week it was confirmed that my season is officially over. After an ankle sprain in practice, doctors discovered more damage that needs to be corrected for long term health and the ability to return to the court stronger than before. This has all come very unexpected, and it hasn't been the easiest thing to process right in the heart of a season. Nevertheless, I am sure this is the correct step and I'm thankful it was revealed before anything worse happened. Above all, I am comforted by the fact that God works all things for his glory, and for the good of those who love him (Romans 8:28). The King who rules it all has brought this to pass, and I know He is my good and trustworthy Father. While this will be a time of adjustment and transition, I see the value of being sidelined for some months, if for no other reason than to remember my identity is found in Christ alone – No sport, no achievement, no earthly delight can ever offer what He's already given me in himself. My greatest prayer is that, through this process, my boast will increase to be solely in the Cross of my dear Savior. He truly is all in all. I am so thankful for the countless moments of joy I've experienced this year (one of which is depicted here). Perhaps the biggest joy (and the thing I will miss the most) has been the journey together with my teammates. Above wins and losses, ups and downs, stats and numbers, it is the group of guys that I will remember for a long time to come. Like brothers, we didn't always get along, but the common goal always kept us "together" along the way, and closer for it in the end. They will continue to pursue the goal, and though my role will be different and I may not be there to battle with them, my heart will be with theirs all the same. Thankful to Rostock and the great fans for the time I got to be a part of this season! Lastly, I'd appreciate any and all prayers from whoever took the time to read this long essay 🙂 My surgery is happening tonight at 11pm Pacific time (8am in Germany). I believe that there is power in the name of Jesus and in the prayers of the Saints, and therefore I covet them all! Thank you in advance. #ps67adventures

Before he proposed to Kelly, Murillo had reportedly injured his ankle, stalling his basketball career. Since then, he’s returned to the U.S. and has been spending time with his family and Kelly while recovering. It also probably meant he could be more involved in the wedding planning.

Tori Kelly kept her relationship with Murillo private for a long time. Although the details about how they met are obscure, they reportedly have been together since at least December 2016.

Murillo popped the question in September 2017, and the couple broke the news to Kelly’s ecstatic fans on Instagram.

she loves as well as she sings ❤️

So, he returned to the U.S. and spent time with his family and Kelly while recovering. It also probably meant he could be more involved in the wedding planning.

They tied the knot on May 20, 2018 before sharing the breathtaking pictures from their outdoor wedding on social media. You can find photographs from their wedding on André Murillo’s Instagram.

For better or for worse, In sickness and in health, To love and to cherish, Till death do us part.

Like Kelly, Murillo’s Christian faith is a big part of his life. He mentioned how his strong faith and basketball saved him in the past. In a gratitude piece on Biola’s website, he wrote that he had a downward spiral before he enrolled there.

His high school basketball coach thought Murillo was a better fit for the football team but went on to make him the star of the basketball team instead. And in his senior year, Murillo apparently went through a “glow-up” and was getting noticed for his game as well as looks.

After his first season in college, a then-19-year-old Murillo got into an altercation at a party. He got beat up pretty badly in the fight when his assailant stabbed him. He suffered a collapsed lung and a scratch on his heart.

Murillo was in critical condition for a week. He underwent five surgeries and spent months on bed rest.

But his hardships increased when he resorted to drug use. He lost his scholarship at Concordia and was expelled.

In 2010, Murillo found strength in his faith and turned his life around. He enrolled at Biola and progressed. He credits Biola Coach Dave Holmquist for giving him a second chance.

These days, Andre Murillo is being a supportive husband to Tori Kelly as she prepares for her upcoming tour, which will kick off in Atlanta, Georgia on October 18, 2018.