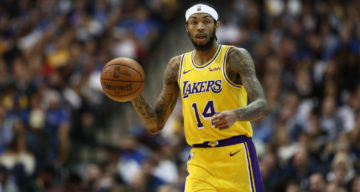 Brandon Ingram #14 of the Los Angeles Lakers during a game against the Dallas Mavericks at American Airlines Center on January 07, 2019 in Dallas, Texas. (Photo by Ronald Martinez/Getty Images)

Both Andre Ingram and Brandon Ingram are NBA success stories in their own rights.

Brandon, 21, was the second youngest player to be drafted in the 2016 NBA Draft when he was selected by the Los Angeles Lakers at the age of 18.

Andre, touted as the greatest player of all time in the G League, was the oldest rookie in the NBA since 1964 when the Lakers signed him for three days in the 2017-18 season at age 32.

Now 33-year-old Andre Ingram has returned to the Lakers in 2019 to fill the void left by Brandon Ingram and Lonzo Ball’s absence. The younger players are out for the rest of the season due to injuries, but Andre’s return is being celebrated. He is, after all, a magnificent player; many believe him to be just what the Lakers need right now.

The Internet is also abuzz with Andre and Brandon’s potential relation. Many are convinced they are family, and it is mighty coincidental that they are both playing for the Lakers.

But is there really a familial connection between the two basketball stars?

Sorry, folks; despite having the same last name, there’s no evidence to prove they are related.

Brandon has referred to Andre as “Cuzzoooo” on Instagram on a couple of occasions, leading to queries about their real relation in the comments. However, there’s no confirmation that they are really cousins. It could just be a joke about having the same last name.

Couldn’t have happened to a better person… CUZZZOOOO 🤣💪🏽 #GODSPLAN #DAINGRAMWAY

Are Brandon Ingram and Andre Ingram really cousins or are they being typical black people and just calling each other cousin because they have the same last name? Either way I’m here for it because Venus and Serena are my cousins

In Andre’s 2018 NBA debut, he scored a historic 19 points, the highest for a debut. Fellow Laker and professional brash-talker Lonzo Ball then congratulated Andre, while taking a subtle dig at Brandon with the hashtag #TheRealIngram.

Brandon took Ball’s shade like a sport, but the tweet set off the Twitter trolls and also curious Twitterati who wanted to know how Brandon and Andre’s are related.

Ima give u a pass tonight https://t.co/dcse12Rny0

Theories abound about Andre and Brandon’s supposed relation. Some are hailing Andre as Brandon’s father who is here to save the Lakers. But that’s impossible with the 12-year age difference between the two athletes.

Others are wrongly assuming that Andre is Brandon’s uncle. But that’s far-fetched at this point, too, since there’s no apparent connection between their parents.

Andre Ingram, the son of Yvonne and Lucious Ingram, was born and raised in Richmond, Virginia. His brother, Lucius Ingram Jr., is seven years older than him.

Andre studied physics at American University, Washington DC. He was drafted by Utah Flash in the 2007 NBA Development League Draft. He played with the Los Angeles D-Fenders and South Bay Lakers in the G League before joining the LA Lakers.

After playing at Duke University, Brandon was selected by the Lakers in the 2016 draft. His brother, Bo, was also aiming to play in the NBA G League, but that plan never materialized.

Whether they are family or not, both Brandon and Andre showcase close camaraderie both on and off the court.