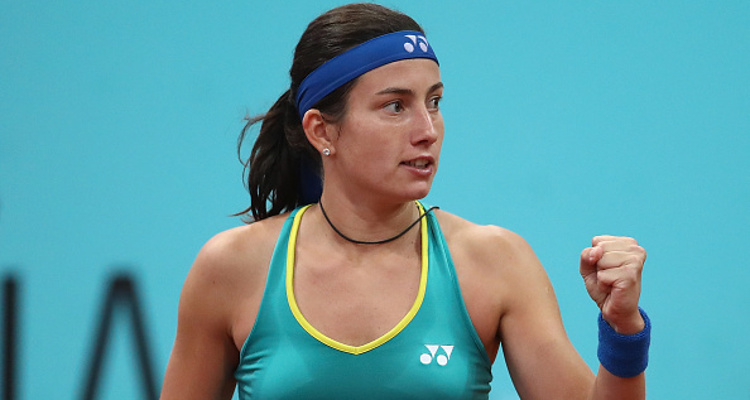 Anastasija Sevastova just beat tennis diva, Maria Sharapova at the U.S. Open, sending the champ packing! While it didn’t come as a surprise to many, Sharapova was distraught by the outcome. Who is Anastasija Sevastova, you ask? How did she rise to the top? Find out everything about the Latvian tennis pro, right here.

Anastasija Sevastova just defeated fellow tennis pro, Maria Sharapova on September 3, 2017. While her win was triumphant, keeping her in the running to win the cup, people are wondering who this exciting newcomer is! Does Anastasija Sevastova have a boyfriend? We have all the details you need to know about the amazing tennis pro, and this year’s possible women’s single U.S. Open champ.

Born on April 30, 1990, in Latvia to Diana Golovanova (an English teacher), Sevastova’s age is 27. She was from a small town with no frills, and had a dream of playing tennis on the world stage. Sevastova first played after her grandmother introduced her to the sport when she was six, and continued with it as a hobby until she was 15. At 17, she won her first WTA match against Anastasiya Yamikova at the 2007 Istanbul Cup.

Though she had some hiccups along her way (like losing the French Open and Wimbledon Championship in 2009), things started to look up in 2009, when Sevastova qualified for the main draw in the U.S. Open and won her first Grand Slam by defeating Thai champ, Tamarine Tanasugarn. The win gave her a new approach and before she knew it, she became a household name, known for her backhand strokes and swift movements.

In 2010, Sevastova defeated world No. 9, Jelena Jankovic in the very first round at the Monterrey Open to reach the semifinals. A slow and steady growth in her career was mapped when she went to the Australian Open and proved her mettle. Though she could not defeat world No. 1, Caroline Wozniacki, she caught people’s eye as a strong player in form and talent.

The year 2013 proved to be dramatic for Anasasija Sevastova. She was injured and had to announce her retirement when she was just 23. When we all thought this might be the end of what could have been a great career, Sevastova was back in after action two years of recovery and rigorous training.

This was about the time that Sevastova’s coach, Ronald Schmidt, helped her get back on track. It is rumored that the Austrian coach and Sevastova began dating during her break from tennis, and it looks like they are still together. Sevastova’s boyfriend was a trainer for Nicole Mikulan before he began coaching the world No. 32.

Anastasija Sevastova was a wild card entry at the Sharm-El-Sheikh tournament, and in the first half of 2015, she won four ITF Tournaments. She then went on to compete at the Brasil Tennis Cup and the Kremlin Cup, losing both tournaments, but making a comeback after her downfall in 2013.

Last year, we saw Anastasija Sevastova in Mallorca and Bucharest where she went to the finals but was a runner up to Caroline Garcia and Simona Halep. The U.S. Open saw a different, more competitive Sevastova. She won over Kateryna Bondarenko and Johanna Konta, securing a place for herself in the quarter finals of the Grand Slam. She could not win over Caroline Wozniacki, but went up in her world ranking from 36 to 32.

Though details of her exact net worth are not known, we do know that a player in her position earns quiet a lot from their matches. Sevastova likely receives annual prize money of about $950,000, and career prize money of around $2,000,000. That should be more than enough to give her a pretty luxurious lifestyle! She even has a Yonex endorsement deal to use their rackets. With her wins and growth in her career, we know she is a player to watch out for at this year’s U.S. Open.