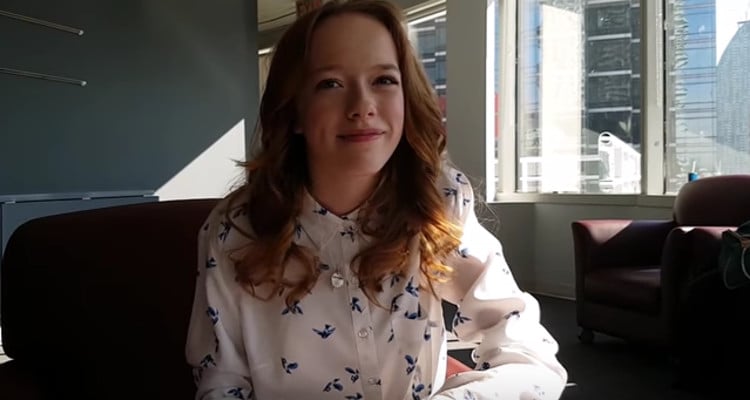 Amybeth McNulty is an exciting new talent from Ireland, who has made both viewers and critics take notice of her in the latest series to hit Netflix, Anne. The 1908 novel spawned the classic 1970’s TV mini-series, Anne of Avonlea, and the subsequent Anne of Green Gables films. Netflix’s adaptation of the classic story will debut May 12 and we’ve got all you need to know about the starring actress, right here in our Amybeth McNulty wiki.

At Amybeth McNulty’s age of 15, she is already a terrific actress who has impressed everyone with her performance in the CBC series, Anne. McNulty plays the lead role of Anne Shirley, which has already aired on the CBC in Canada, and will premiere on Netflix on May 12. Anne is a Canadian television series based on the 1908 novel Anne of Green Gables, written by Lucy Maud Montgomery. People want to know more about the young actress, so we have some details from Amybeth McNulty’s wiki.

She Had Intense Competition

Amybeth McNulty was born on November 7, 2001, and is an Irish Canadian actress. McNulty currently lives in Donegal, Ireland and has appeared in several TV shows like Agatha Raisin, Clean Break, The Sparticle Mystery, and now in Anne. She also acted in the 2016 film, Morgan, where she played the titular character of Morgan as a 10-year-old. Competition for the role of Anne was very intense, and McNulty beat out more than 1,800 other actresses hoping to be cast.

Also Read: Chris Marek: Everything You Need to Know about Amy Roloff’s Boyfriend

The Series Will Debut on Netflix

Although Anne has already aired on CBC, you will be able to stream it on Netflix soon, as well. It will debut on Netflix on May 12, 2017 with the title of the series, Anne with an E. Netflix’s new series was partly filmed in Prince Edward Island, as well as Millbrook, and Caledon, Ontario. The Anne with an E cast includes Amybeth McNulty, Geraldine James, R. H. Thomson, Lucas Jade Zumann, Dalila Bela, Corinne Koslo, and Aymeric Jett Montaz.

Happy international women's day my friends. As a women myself this day is incredibly empowering. I bring this day back to @annetheseries , because I hope to bring joy and empowerment and strength through this project to women across the world. Anne is a fighter, she is courageous and a believer, and so are you. With the many women working behind the scenes and on camera during shooting, Doing jobs that were 'usually a mans work' was not exciting or shocking.. it just felt right. My love goes to all of you today? #happyinternationalwomensday

Not much is known about McNulty’s family, other than the fact that her mother is Canadian. Though McNulty has had several dramatic roles at a young age, her Instagram account shows what a fun-loving young girl she truly is. McNulty’s Instagram account also has pictures from the set of Anne with an E. The future looks bright for this young and talented actress, and people are already buzzing about her impressive role in this beloved story. Anne with an E will be available to stream on Netflix from May 12.