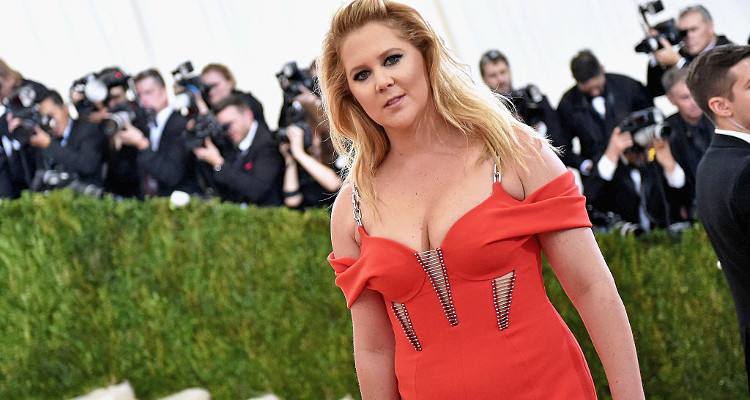 We’ve been looking forward to Snatched ever since we found out that Amy Schumer and Goldie Hawn are working together. Days after we got our first look of the film, Schumer took to her Instagram to thank the people behind her Snatched look.

We can never have enough of Amy Schumer! The beautiful and talented actress has made us laugh time and again. In May 2017, we’ll see Schumer star alongside Goldie Hawn in the mother-daughter comedy, Snatched. Schumer does not just star in the film, but also helped write the script. The first trailer for Snatched was released on Friday, and now, Schumer posted a picture on Instagram thanking her makeup artists and stylists who worked on her look for the film.

Schumer thanked Kyra Panchenko, an Emmy Award-winning makeup artist, hair and makeup stylist Andrea Tiller, and costume designers Leesa Evans and Robin Fitz in the caption. In the picture posted, Amy Schumer appears to be in the middle of prepping her Snatched look.

In the trailer, we get our first look at Schumer and Hawn as a bickering mother and daughter who travel to South America. The trailer shows Schumer’s character getting dumped by her boyfriend and ends up going on a vacation with her mother, played by Hawn. Their vacation starts off just fine until they get involved in a nefarious kidnapping plot. In the trailer, the ladies are seen doing some charismatic high-flying action like jumping across buildings, Hawn carrying a man across her shoulders, jumping on to moving vehicles, and lot more.

I loved every second with @kyrasp @andrea_tiller @robinfitz @leesaevansstyle the MVP was def @kimmykuppkakes the funny kind badass bitches that keep me alive looking fly for years and years now. I love you ladies. Let's keep going together. @snatchedmovie

This is Hawn’s first big-screen role since 2002’s Banger Sisters. Schumer and Hawn met on a flight a few years ago when the comedian proposed the film to the veteran actress. According to Schumer, she had seen Hawn at some other events since and had proposed the idea again, until “I think, eventually, some people got in her ear and told her I wasn’t crazy, that I make things.”

Snatched and Schumer already garnered negative attention when the leading ladies released a tribute to Beyoncé’s “Formation” video. Schumer apologized and defended the video saying they were only inspired by Beyoncé’s female empowerment lyrics and never intended to appropriate, or insult anything.

Snatched is one of the most-anticipated movies of 2017 thanks to Hawn’s return to the big screen. Watch the first official trailer of Snatched below.