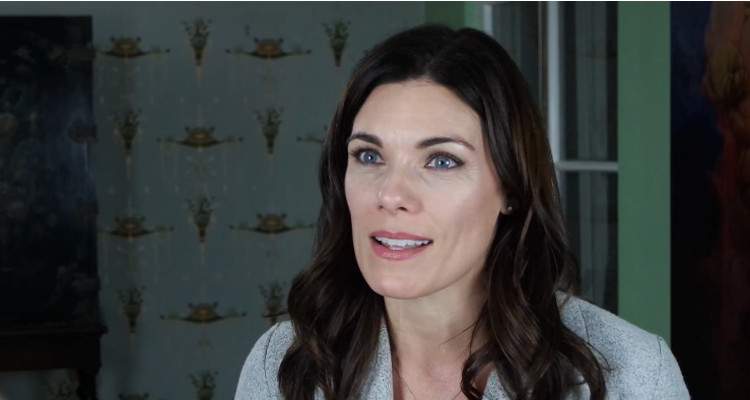 Actress Amy Motta rose to fame with appearances in some of the most popular shows on television. Motta’s acting credentials include roles in Grey’s Anatomy, Modern Family, and Mad Men, among many others. She has also appeared in films and commercials. Now, the actress enjoys being a wife to music composer, Fred Coury and doting mother to their dogs. Keep reading to know everything about her personal life and career in our Amy Motta wiki.

Amy Motta’s beautiful smile is the first thing you’ll notice about the actress. Motta has delighted fans with her roles in some of TV’s most favorite shows.

Fans loved her as Jenna Lee in Grey’s Anatomy and as one of Don Draper’s love interests in Mad Men. You may also remember her from TV commercials for SharkNinja and Waterpik!

Amy Motta now stars in a new series called Corporately Challenged. She will also appear in a movie set to release in 2018.

Off-camera, you’ll see Motta enjoying a quiet life with her husband and dogs.

Here are more details about this gorgeous actress below.

Amy Motta always knew that acting was her calling. Her first stage performance was playing the role of Mrs. Darling in her high school’s production of Peter Pan.

Motta went on to pursue a degree in theatre from Arizona State University and soon moved to Los Angeles. She immediately fell in love with the city, especially West Hollywood.

The actress made her acting debut in the 1998 movie, Extramarital, and has gone on to appear in a string of television shows and films over the years.

Whether it was the flirty Jenna Lee in Grey’s Anatomy or the confident Alice from Mad Men, Amy Motta has played all her roles with the flair and poise only an accomplished actress can pull off! Just name a popular television show, and it’s most likely that Motta has appeared in it!

Amy Motta’s TV shows include The Bold and the Beautiful, Brothers & Sisters, CSI: Miami, The Mentalist, and The Young and the Restless.

The actress also has a few film roles to her credit. Motta had supporting roles in 2009’s Spread starring Ashton Kutcher and 2014’s Tentacle 8.

Fred Coury took up the violin as a five-year-old boy, and his first public performance took place when he was six years old. He grew in his love for music and also learned to play the trumpet and drums. Coury went on to perform with American rock band, Cinderella.

Amy Motta’s Instagram is filled with pictures of the couple together. And, they seem to have a very loving relationship!

This is when you're not sure what to do with your extra hand… beecause you haven't been to broadcasting school, @andymoats

You’ll also find loads of pictures of Motta’s dogs. How adorable are they?

In case you were wondering what #bliss looks like. I'm in #Vegas with Charlie. …. #nbd #adoptdontshop #rescue @dogumantry and @yulianalorcadesigns are magical.

What Is Amy Motta Doing Now?

In her new series, Corporately Challenged, Motta plays the role of Alana. She’s a senior analyst on the marketing team who’s trying to climb the corporate ladder at a firm called Milton & Milton Inc.

The show’s scriptwriter, Shannon Phipps, said about Motta, “Amy plays a straight character in the show but off-camera she is quick-witted and full of jokes. She is excited by playing strong, smart characters like Alana. Her enthusiasm and dedication to the project made her a joy to have on set.”

Motta will soon be appearing in a movie called Trapped that is currently in post-production. The film is a story of two girls and the bond they form while attending a wilderness camp for troubled teens.

We can’t wait to see more of Amy Motta’s amazing acting skills and incredible personality in the new year!