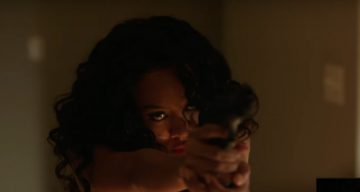 Ameshia Ervin was Falicia Blakely’s accomplice in the murder of three men in August 2002. Now, a made-for-TV film, When Love Kills: The Falicia Blakely Story details the crime and the circumstances that led to it. Ervin was sentenced to prison with the possibility of parole after 14 years.

On August 15, 2002, Ameshia Ervin and her 19-year-old accomplice, Falicia Blakely, killed three men in two days. The three men were Claudell Christmas, Raymond Goodwin, and Lemetrius Twitty. When police found Ervin and Blakely, they were at a diner, driving the car of one of the men they murdered the week before. While questioning the two, they confessed to all three murders. This crime shocked the nation and still bewilders people today. Now, a new movie called When Love Kills: The Falicia Blakely Story based on the crimes of Ameshia Ervin and Falicia Blakely aired on TV One at 9:00 p.m. EST on August 28, 2017. This sparked further interest in the 15-year-old crime, and people want to know where Ameshia Ervin is now?

Ameshia Ervin’s age was 22 at the time of the crime, which makes her 37 years old now. She was an exotic dancer in a nightclub when she and Blakely shot the three men. According to Blakely’s lawyer, it isn’t clear whether the idea of the robbery was of the girls or if they fell victim to someone else. However, the DeKalb County Assistant District Attorney Tom Clegg, who was trying the case, said that Ervin and Blakely did not show any “remorse” and treated their crimes as “business prepositions.” Clegg offered Ervin the possibility of parole if she pleaded guilty and testified against Blakely. Ervin took the offer and, though she is currently serving a life sentence, she was eligible for parole after 14 years.

Ervin, who is known as “Pumpkin” in the movie, was played by Tiffany Black. Filmmakers say that When Love Kills isn’t just another true-crime story. It follows vulnerable women who get caught in very abusive relationships, making them easy prey for those who want to take advantage of them. Ervin got away relatively lightly, but Blakely was sentenced to life without the possibility of parole. Ervin might be released soon, but nothing regarding her parole hearing is available as of yet.

Also Read: Falicia Blakely Wiki: What’s Her Story? Where is She Now?