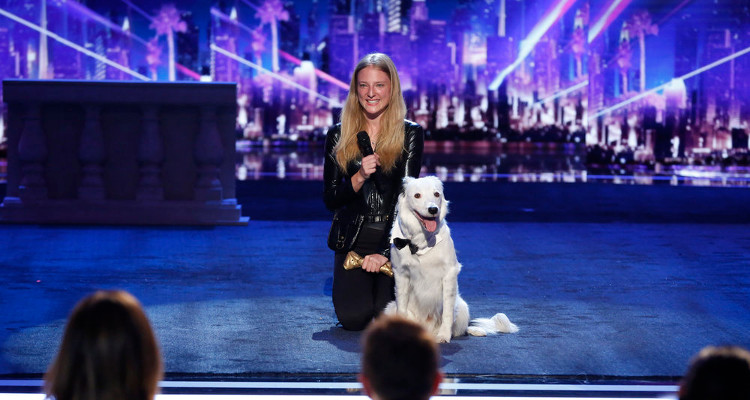 A cute dog stole the judges (and the viewers) hearts on America’s Got Talent last night. Sara and her furry friend, Hero improved their act and impressed more than just Simon Cowell this time around, earning them a spot in the next round. Here is everything you need to know about Sara and Hero from America’s Got Talent.

Season 12’s audition rounds of America’s Got Talent finished last week. Now, the judges have to skim through all the performances in the Judges’ Cuts and shortlist the acts who will perform in the live show. In the Judges’ Cuts, several people will be heartbroken and sent home.

We saw a variety of acts during the audition round of America’s Got Talent. During the Judges’ Cuts, we will also get to see upgraded and improved version of these acts. From musicians to singers, magicians, stunt acts, and dancers, the performers bring all kinds of variety to the stage. On Tuesday’s (July 18) episode of AGT, Chris Hardwick was the guest judge. A total of 20 participants exhibited their talent, but only seven contestants made it through to the next round. One of the contestants who managed to steal a spot was Sara and her adorable dog, Hero. If you want to know more about them and their brilliant act on America’s Got Talent, then keep on reading!

Carson grew up in Ontario, Canada and has worked with dogs for the last 12 years. Carson even had her own dog training business for five years, which was pretty successful. While she was in the business, she trained dogs, teaching them obedience, tricks, agility, and puppy foundations. Besides running her business, she traveled to North America to perform with a stunt dog team.

Carson has already made a mark on the world. She is regarded as one of the best trick dog instructors and her audition last night finally got some real heads to turn! Additionally, she assisted and taught several online free trick classes on various social media platforms. Carson also has fun competing in Canine Freestyle, Frisbee, and Dock Diving.

Furthermore, she has even made an appearance on The Late Show with David Letterman. Carson and her dog Hero has impressed viewers all over the world. Besides this, they have also appeared on various platforms such as CTV News, The Marilyn Dennis Show, Purina National Dog Show, and Rogers Daytime Toronto. Carson trained Hero for several commercials!

Sara and Hero’s Original Audition on America’s Got Talent

During the first audition rounds, Sara and her five-year-old dog, Hero, took over the AGT stage. When she was asked what would she do with the $1.0 million prize, she said that she would persuade and encourage every dog owner to train their pets. Their act involved Carson using a sword, but Hero was trained so skillfully that he jumped the other way at the sight of it!

When the act finished, it was Simon Cowell who seemed to be the only one who enjoyed it! The other judges just didn’t seem to be blown away by any of Hero’s tricks, but Simon saw something special in these two. He then took to the stage to beg the judges to change their votes, Howie needing more persuading that the rest. Finally, he gave up and gave her a yes, and along with Heidi “Yes,” Sara and Hero were the next act to move forward. (Three yes’ from the judges are required for acts to progress to the judges’ cuts.)

During the next round, Carson revealed that at the moment, she and Hero were living in her car! The two travel around the country performing their acts, and she hopes to push through this struggle to create a better life for herself and Hero. Their act definitely was an improved version of their last performance. Needless to say, they advanced to the next round!