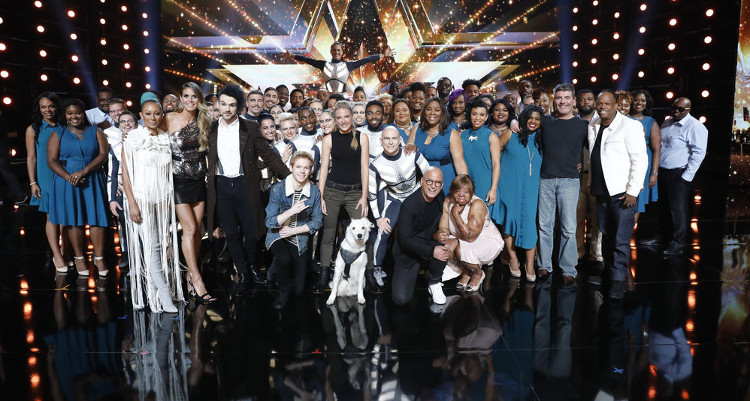 In two weeks, we will find out which of the 21 remaining AGT contestants will go home with $1.0 million. Wednesday night was the last week before the semifinals and each contestant gave their best performances. Out of the 12 who performed, only seven made it through. Keep reading for the America’s Got Talent live results for week 3.

The Contestants Who Performed Were:

Each contestant poured their hearts and souls into their performances. Viewers voted five contestants through to the semifinals, one act won the Judges’ Choice, and the final winning performer was decided through the Dunkin’ Save real-time voting.

Who Made it through on America’s Got Talent?

The acts who made it to the semifinals include Acrobatic Dance Group, Diavolo; singer Kechi Okwuchi; singer-songwriter Chase Goehring, who is expected to perform in week 2 of the semifinals; and singer Mike Yung who has been singing in New York subway stations for almost 37 years. The final three acts on the AGT stage were Junior & Emily, Sara and Hero, and Oscar Hernandez. Of the three, the act America decided to save was Sara and Hero.

Who Did Not Make it Through?

Unfortunately, five contestants were eliminated: Angelina Green, Junior & Emily, Final Draft, Oscar Hernandez, and Oskar & Gaspar. As far as eliminations go, this was definitely a difficult one for the judges. Especially Heidi Klum, who had to say goodbye to 13-year-old Angelina Green, whom she used her Golden Buzzer to send straight to the live shows.

In the next two weeks, we will see the remaining 21 contestants perform in the semifinals. The winner will take home $1.0 million and have a three-week stint in Las Vegas, starting in November. It will tough to decide the AGT winner out of these amazing semi-finalists. Who is your favorite contestant on America’s Got Talent? Are you happy with the latest live show results? Let us know your thoughts in the comments section below! Tune into America’s Got Talent on Tuesday, September 5 at 8:00 p.m. EST on NBC for the first round of the semifinals.