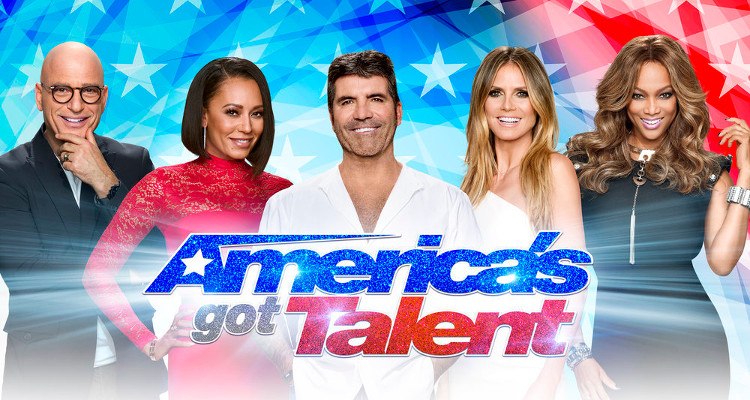 The 58-year-old and her 11-year-old dog, Mia Moore, are from Lighthouse Point, Florida and entertained the judges with Mia’s math skills. Edna and Mia Moore’s act was the first one of the day and, with the help of the judges, Mia “counted” to the numbers given by the judges. Next up, Tyra Banks walked out with flash cards and randomly chose the number 20, and the pup delivered. Mia barked her way into the hearts of the audience and judges, making it through to the next round.

The 9-year-old singer is from Atlanta, Georgia and revealed on the America’s Got Talent stage that she was gonna be a big sister soon. Angelica Hale wants to be the next Whitney Houston and we think she is on her way! She perfectly sang the song “Rise Up” by Andra Day with so much power and range that all four judges gave her a standing ovation.

This is not the first time the brother and sister duo appeared on a reality show. Simon Cowell immediately recognized them from Britain’s Got Talent. Billy and Emily England performed some terrific stunts on roller skates and totally impressed the judges and audience. The pair were obviously given the green light, and are moving on to the next round.

The Azeri brothers call themselves “superhuman,” and we believe it! They performed several dangerous tasks, including hammering nails into wood with their bare hands and heads, as well as balancing on top of a modified pitchfork while one of the brothers was laying down on nails. Heidi Klum and Howie Mandel could not take stunts and pressed their buzzers before the act was over. However, Simon Cowell seemed to have enjoyed himself, and Mel B. also gave her approval. Mandel asked the audience’s opinion and decided to change his mind. With three “yes” votes, the Azeri brothers made it through.

The 21-year-old is a singer and songwriter who performed his original song, “Hurt.” Chase Goehring played guitar, and broke into a rap, further impressing the crowd. With some coaxing, all four judges agreed to give him a chance.

Colin Cloud is a 30-year-old forensic mind reader, who claims to be the real-life Sherlock Holmes. He can read minds and give minute details about their lives. To prove his skill, he correctly guessed the professions of some of audience members. The judges were enthralled by his performance and they unanimously decided to put him through.

Nick Uhas was a contestant on Big Brother Season 15. However, on the AGT stage, he wowed the judges with a couple of awesome science experiments. His act involved all the judges, with balloons filled with a gas that made their voices go deeper, chemicals in large beakers to form a quick-expanding foam, and a large trash can to create an explosion of steam.

This dance troupe from Los Angeles presented an acrobatic routine with their creative director, Jacques. The group had a secondary stage, which they used to jump back and forth while balancing and flipping off of it. Their routine impressed all the judges and the group got a ticket to the next round.

Child duo, Aryton and Paige danced to Aqua’s “Barbie Girl.” Their act did not impress Simon Cowell, who he rolled his eyes as soon as the music started, and did not hesitate to press the buzzer. However, the other three judges enjoyed Aryton and Paige’s performance and their approval was enough to take the kids to the next round.

The 29-year-old lost her hearing ability at the age of 18, due to a connective tissue disorder. She sang her original song “Try,” which earned a golden buzzer from Simon Cowell. Mandy Harvey’s voice was truly mesmerizing and now people can’t stop gushing about her! She is the only person in episode 2 to get the golden buzzer, which means she will be sent directly to the live shows.

Now that we’ve gotten to see some enthralling performances on America’s Got Talent, we can’t wait to see what is yet to come! Who is your favorite contestant on America’s Got Talent 2017? Let us know your opinion in the comments below, and don’t forget to watch another exciting episode of AGT on NBC next week!