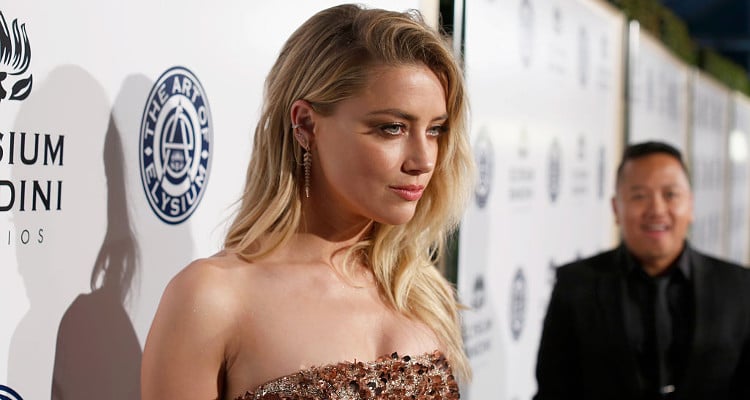 It’s no surprise that Amber Heard and Elon Musk are spending so much time together, as the paparazzi have spotted them quite a few times in the last few months. But are they really dating? Well, Amber Heard’s latest Instagram post has certainly cleared all of our doubts! Here’s everything you need to know about Elon Musk’s new girlfriend in Amber Heard’s wiki.

Amber Heard recently settled her divorce with Johnny Depp in January 2017. The 31-year-old actress posted an Instagram photo of herself with Tesla Motors & SpaceX founder, Elon Musk and it was hard to ignore the red lipstick mark on his cheek (we can’t help but guess where it came from!) Amber Heard celebrated her 31st birthday on Saturday (April 22) and the Never Back Down actress has some action-packed movies lined up for us in 2017, including the highly anticipated, Justice League. Here are some interesting facts to know about Amber Heard.

Amber Heard’s Net Worth is a Whopping $9.0 Million!

Most of Amber Heard’s net worth comes from her acting ventures, which include her stellar performances in The Danish Girl and Pineapple Express. She has also taken up endorsement projects for the infamous jewelry company, Tiffany & Co. and Italian jewelry and luxury goods brand, Bulgari.

Heard has acted in about 30 movies. Her debut film was Friday Night Lights alongside Billy Bob Thornton, which did fairly well at the box office. She had some small roles in the coming years until Pineapple Express, which was released in 2008, owing to which she gained more popularity and recognition. Another highlight of her career was Never Back Down, the 2008 martial arts drama, which was also a huge success.

Her upcoming movies include the highly-anticipated Justice League (2017) and Aquaman (2018). She plays Mera, Aquaman’s Atlantean queen in both DC Comics movies.

Amber Heard and Johnny Depp: Their Beautiful Wedding to Their Messy Divorce

Amber Heard and Johnny Depp met while filming The Rum Diary, the story of an unsuccessful author and journalist (played by Johnny Depp) who falls in love with his boss’ fiancé (played by Amber Heard). However, the real-life couple weren’t officially together until 2012. Heard was overwhelmed by Depp’s romantic gestures and during the early stages of their relationship —which included a horse!

The couple became the talk of the town when they revealed news of their engagement in 2014. On February 3, 2015, Heard and Depp got married in the Bahamas on Depp’s private island. The newlyweds also became a part of a huge controversy when they smuggled their pet Yorkshire Terriers, Pistol, and Boo, in Australia. The issue surfaced on all the media outlets, and finally, Pistol and Boo had to be sent back to the United States.

In May 2016, Heard filed a temporary restraining order against Johnny Depp, after claiming that he had domestically abused her in December 2016. She also claimed that she had photos proving the horrifying incident. Another shocking incident came into the limelight when Heard confessed that Depp grabbed her by her hair and violently shoved her to the floor. The couple clearly showed signs of splitting up and were rarely seen together after these incidences.

On May 23, 2016, the couple filed for divorce, and the case concluded when Depp agreed to pay a sum of $7.0 million to settle the case. Johnny Depp’s net worth didn’t see any major changes after their divorce.

Like every celeb, Amber Heard has also been linked to many stars. Her relationship with Johnny Depp, and their subsequent divorce, were highly publicized. What most people aren’t aware of is that Heard opened up about being bisexual in 2010 at the Gay & Lesbian Alliance Against Defamation’s (popularly known as GLAAD) 25th Anniversary event. She said, “I don’t label myself one way or another—I have had successful relationships with men and now a woman. I love who I love; it’s the person that matters.”

This was the first time she talked about her relationship with the renowned artist and photographer, Tasya van Ree. They two were dating from 2008 to 2012. However, things seemed to spiral downward after Heard was arrested for an alleged altercation with von Ree at the Seattle-Tacoma International Airport in 2009. She was accused of domestic violence after she struck van Ree’s arm. However, after Heard appeared in court, the prosecutor did not file any charges against her.

She Donated $7.0 Million to Charity from Her Divorce Settlement with Johnny Depp

Amber Heard received an amount of $7.0 million after her divorce settlement with Johnny Depp in August 2016. Soon after the proceedings, Heard announced that she would be donating all of the settlement money to charity.

Heard further said that she would donate half of the amount to American Civil Liberties Union, to be put towards stopping violence against women. She also added that she will donate the remaining half to the Children’s Hospital of Los Angeles, where she has been volunteering for the past 11 years. Both organizations were grateful for her immense contribution and even acknowledged their gratitude in separate interviews.

The actress has been a very committed social activist, who does not fear raising her voice against injustice. Heard has raised awareness on issues like domestic and sexual violence. Her outspoken nature is something which is very commendable, and we respect her for that.

Elon Musk and Amber Heard make a great couple and we would love to see more of them. Will we hear wedding bells ringing?